Prices on the oil market are continuing to tumble as the new week of trading begins. Brent has fallen this morning to $67.5 per barrel and WTI to $64 per barrel – both correspond to their lowest prices for more than five years. In other words, prices have shed a good 10% since OPEC’s meeting last Thursday. We view the extent of the price response as exaggerated given that OPEC ultimately decided to do precisely what not only we but also the majority of market participants had anticipated. Nonetheless, there is no end in sight to the price slump, the prospect of a massive oversupply in the first half of 2015 – to the tune of roughly 1.5 million barrels per day – weighing heavily on prices. Now that OPEC has refused to take any steps itself to reduce this oversupply, non-OPEC producers will have to do their bit. Allegedly, Saudi Arabian Oil Minister al-Naimi was able to persuade the other OPEC members to maintain production volumes at their current level by highlighting US shale oil producers as a potential target to attack. They are likely to face growing problems, especially as the price of Bakken oil is now trading only just above $60. According to industry data and Reuters, the number of new shale oil rigs approved in October has apparently declined by 15%. This suggests that we will see a corresponding fall in the oil rig count in the coming months and, after a certain delay, knock-on effects on oil production. It is therefore reasonable to assume that the US Energy Information Administration (EIA) will have to revise its optimistic forecast for US oil production in 2015 significantly downwards. 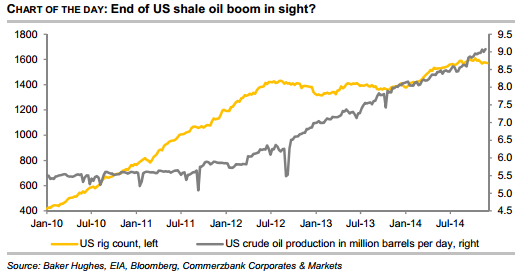