Oil prices have resumed their downswing after a brief interruption. Brent almost dropped back to the 3½-month low of $41.8 per barrel it hit at the end of last week, while WTI dipped below the $40 per barrel mark for the first time since mid-April. 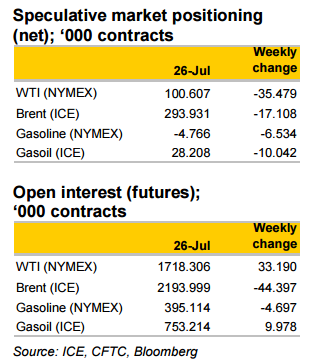 Financial investors are increasingly betting on a continuing price slide and are thereby generating additional selling pressure. According to the ICE, speculative net long positions in Brent decreased for the seventh week in a row in the week to 26 July to reach a five-month low of 294,000 contracts. Net long positions plunged by 84,600 contracts during this period. In the past four weeks this was due chiefly to an increase in short positions, while long positions were hardly reduced at all. The increase in OPEC oil production to a multi-year high in July – according to a Reuters survey – was attributable first and foremost to a sharp upward revision of production in June by almost 500,000 barrels per day. Of this total, 210,000 barrels per day were due to Gabon, the new OPEC member, which was only included in the data series by Reuters retrospectively. What is more, Saudi Arabia’s oil production was also upwardly revised by 250,000 to 10.55 million barrels per day, however, which means Saudi Arabia was almost producing back at its record level from June 2015. Admittedly, this may be due to its own higher domestic consumption during the summer months – however, the latest price cut for Asian customers suggests that Saudi Arabia is continuing its battle for market shares. This is not good news for the oil price. 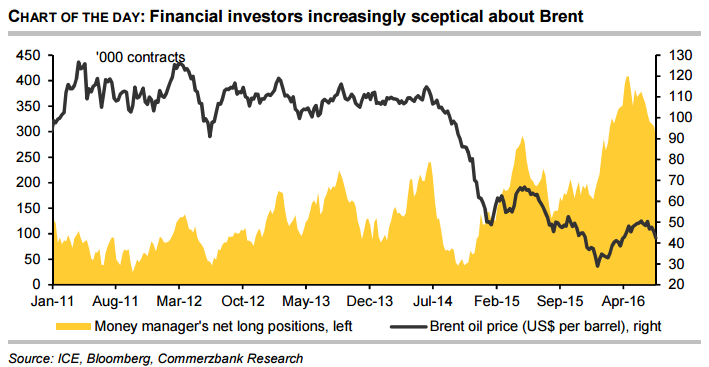