Oil prices have been under pressure since yesterday evening. Brent has dipped below the $50 per barrel mark again, while WTI is likewise significantly down on yesterday at $48 per barrel. Speculative financial investors are clearly retreating from the oil market. Both Brent and WTI already saw their speculative net long positions cut noticeably in the week to 28 June. Net longs in Brent were reduced by a good 20,000 contracts, while those in WTI were even slashed by more than 28,000 contracts. 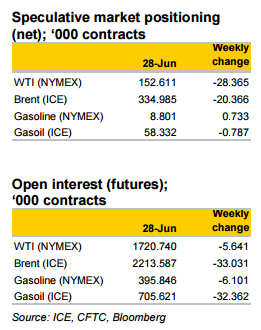 The reduction was presumably triggered by the Brexit referendum which took place during the reporting week. In other words, the decline in oil prices in the wake of the vote is doubtless attributable to speculative selling. At 335,000 contracts, speculative net long positions in Brent are only 18% below the record level they achieved at the end of April. In the case of WTI, on the other hand, the correction has already advanced further, with net long positions now a good 30% below their end of April level. An oversupply of gasoline is likewise generating selling pressure. Despite record-high gasoline demand, gasoline stores in the US are amply filled, and are even at a record level on the US East Coast. Several tankers carrying gasoline could not be unloaded at the Port of New York and were forced either to anchor offshore or continue on to the US Gulf Coast. The gasoline crack spread is currently at the same level as the diesel crack spread, which is unusual during the summer months. Consequently, refineries may process less crude oil, which would drive up stocks of crude oil. 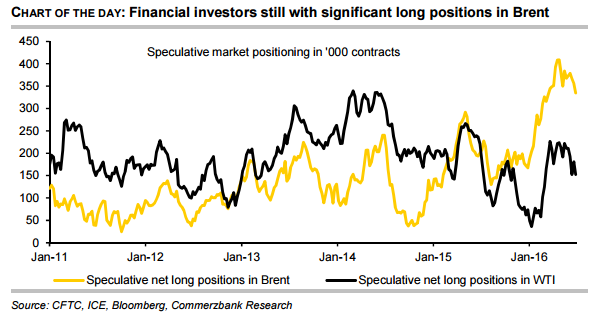