Brent failed yesterday to stabilise at above $45 per barrel and has even dipped below $44 per barrel again this morning. The price climbed ahead of the DOE’s inventory data, but then fell by over 3% within a matter of minutes following their publication. The time presumably seemed right for many market participants wishing to bet on falling prices, but ultimately the figures do not justify the price slide. 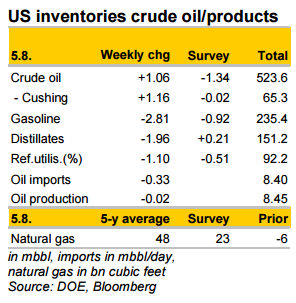 For one thing, the increase in US crude oil stocks by a “mere” 1 million barrels was significantly smaller than the API had reported a day earlier. And for another thing, the report showed a further decline in US oil production, and even more importantly a 2.8 million barrel decrease in US gasoline stocks, too. US gasoline demand thus remains very robust, and should really give rise to optimism in conjunction with the extremely robust July car sales figures from China. Yet there was a distinct lack of any such optimism in yesterday’s OPEC monthly report, which continues to assume that demand will grow by merely 1.15 million barrels per day in 2017. Given that OPEC reports higher production at the same time, a production surplus is now also envisaged next year. The scales could be tipped either way depending on how Saudi Arabia decides to proceed. The Kingdom reported that production was expanded to a new record of 10.67 million barrels per day in July. Admittedly, this is partly due to the higher level of domestic demand that is usual in the summer months. Nonetheless, it simultaneously fuels fears of a further escalation of the price war (against US oil producers and its OPEC rivals), especially since Saudi Arabia has reduced the price premiums for its September shipments to the US and has increased the discounts for Asian shipments.