Oil prices made strong gains yesterday for the third consecutive day, Brent rising by a further 8% and WTI by 9%. Another sharp price increase did not seem on the cards at the start of trading yesterday, as oil prices were down by 3% for a time. It was not until the later course of US trading that prices rose significantly. Since last Thursday and up to and including yesterday, Brent has achieved a price gain of a good 25%, while WTI is up by more than 27%. In both cases these are their most pronounced three-day increases since August 1990, when Iraqi dictator Saddam Hussein invaded the neighbouring country of Kuwait, causing oil prices to soar. Following their massive gains in the last three days of trading, oil prices ended the month of August approx. 4% up, after having recorded losses of as much as 20% in the first three weeks. This price slide was not attributable to any change in the fundamental data since the end of July, however, but was due primarily to exaggerated concerns about China. As such, oil prices have merely returned to their end-of-July levels, which makes sense: after all, the oil demand figures from China have shown no signs of weakness whatsoever of late. Yesterday’s price surge was sparked by a report from the US Energy Information Administration (EIA), which showed that US crude oil production declined considerably more sharply than anticipated between April and June. According to the report, output in June totalled 9.3 million barrels per day, i.e. 250,000 barrels per day less than previously estimated. What is more, OPEC signalled in a report its willingness to talk to non-OPEC producers about measures aimed at shoring up prices. 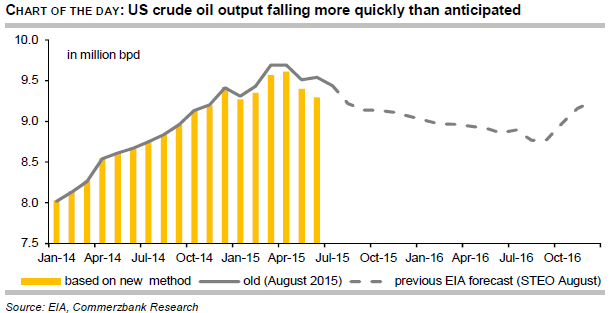