Oil prices are continuing to slide unchecked. At only marginally above $45 per barrel, Brent is now trading at its lowest level since March 2009. At less than $45 per barrel, WTI is at its lowest price since April 2009. Even record-high Chinese crude oil imports in December of 7.15 million barrels per day have not been able to halt the plunging oil prices. 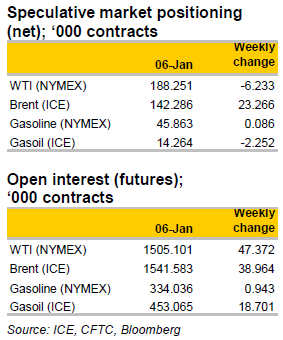 The lack of any reaction from the market indicates that demand factors play no role at present and that supply is the dominant factor. The oil minister of the United Arab Emirates believes that shale oil is to blame for the current oversupply, and claims that any correction must therefore be made on this side. The US Energy Information Administration (EIA) may paint a clearer picture of the situation when it publishes its current supply and demand estimates this evening – the first of the three energy agencies to do so – as well as the first estimates for 2016. The main focus here is likely to be on the anticipated development of US oil production. Back in December, the EIA had already downwardly revised its figure for production growth this year to just 260,000 barrels per day and forecasted stagnant oil production in the second half of the year. In view of the continued price slump, an additional downward revision for 2015 and declining US oil production in 2016 cannot be ruled out. The latest price slide was not driven by speculation – indeed, money managers significantly expanded their net long positions in Brent to 142,300 contracts in the week to 6 January, putting them at their highest level since July 2014. Presumably the idea was to bet on a short-term price recovery, but this strategy did not prove successful. If investors were to sell because of the losses they have accrued, the price would come under further pressure. 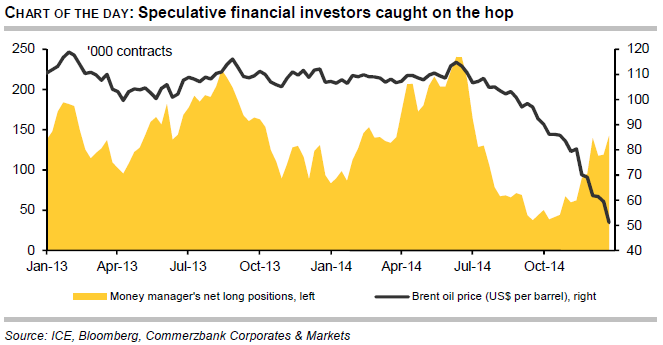