Oil prices are beginning the new week of trading with slight losses. Brent has dropped below the $60 per barrel mark while WTI is nearing the $50 per barrel mark. In other words, we are not seeing the same pattern as in previous weeks, when prices rose at the beginning of the week. Although Baker Hughes reported on Friday evening that the oil rig count in the US had declined for the eleventh consecutive week, it fell by a mere 37 rigs, which constitutes the lowest weekly decrease in seven weeks. What is more, the absolute oil rig count remained above the psychologically important 1,000 mark. Evidently, the strong recovery in oil prices since the end of January has slowed the scaling back of drilling activity. One positive aspect worth noting is that closures concerned primarily the high-yield horizontal oil rigs which are used in the production of shale oil – the fall in their number was only slightly lower than in the preceding week. The decrease in drilling activity is likely to slow further if WTI prices remain above $60 per barrel for a year or longer, as the forward curve currently suggests. Another factor that has been facilitating the price recovery of late was the behaviour of financial investors, who reduced their bets on falling prices in anticipation of declining US oil production. According to the CFTC, speculative net long positions in WTI responded in the week to 17 February by climbing to their highest level since mid-December. Investors also behaved much the same way with respect to Brent recently. The ICE will be publishing the latest figures at lunchtime today. 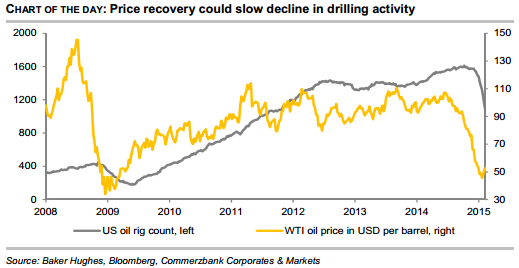