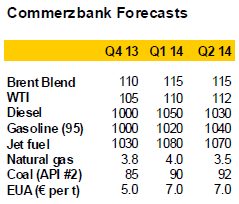 US crude oil stocks have fallen significantly during the summer months. Since the end of June they have declined by 38m barrels and in mid-September reached their lowest level for 18 months. Destocking has been concentrated on two regions: in the Midwest (PADD 2) stocks have fallen by more than 20m barrels, and on the US Gulf Coast (PADD 3) by more than 14m barrels (chart 1). The lion’s share of the destocking in the Midwest related to the storage hub in Cushing, where stocks have fallen by a total of 16.5m barrels for 13 weeks in succession. What is the reason for this surprising trend and will the destocking continue?

The trend in stock levels can be divided into three sub-components: on the supply side are US oil production and US oil imports, and on the demand side, crude oil processing by refineries. US oil production has increased until recently. In mid-September it reached its highest level since May 1989 of more than 7.4m barrels per day. This component cannot therefore explain the destocking of recent weeks. On the other hand, imports of crude oil have fallen sharply. In the summer months they were, on average, 1m barrels per day lower than in the previous year. However, this will not be sufficient to balance out the simultaneous increase in US oil production. Between the end of June and mid-September this was, on average, 1.4m barrels per day above the previous year’s level. The trend on the supply side would therefore have been an indication of stockbuilding. The main reason for the significant destocking this summer is therefore to be found on the demand side, i.e. from the higher volumes of crude oil processed at refineries. 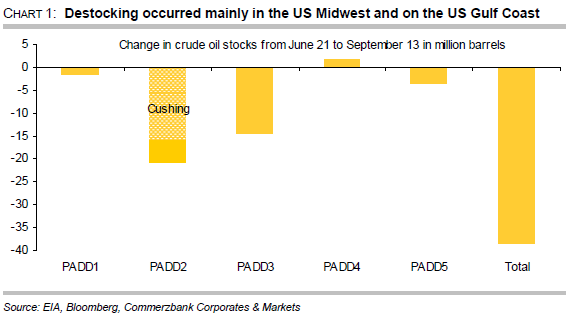 US refineries stepped up crude oil processing much more significantly than usual this summer. Between the end of June and mid-September, an average of 16m barrels of crude oil was processed daily. This was 600,000 barrels per day more than in the corresponding period last year, and 900,000 barrels per day more than the long-term average level (chart 2). At the beginning of July, more crude oil was processed than at any time in the last eight years. It was also striking that refineries maintained processing rates at their high levels of July and August up to mid-September. Normally, refineries scale back their utilisation from the end of August as the summer driving season approaches an end. Refineries usually use the time in early autumn to carry out maintenance and to switch operations to the winter season. Hence, significantly more crude oil has been processed this summer than would otherwise be normal at this time of the year. This has only been possible by consistently dipping into crude oil stocks, although more crude oil has also been available as a result of the increased level of domestic oil production.

This cannot be explained with trends in the US gasoline market…

The fact that US refineries have increased their crude oil processing so strongly over an extended period this summer cannot be explained by trends in the US gasoline market, which is normally the most important driver of refinery activity in the summer months. Demand for gasoline in the US during the summer driving season showed virtually no increase compared to last year. US gasoline stocks have remained consistently 5 to 6 per cent above their long-term average for weeks with a few exceptions. US gasoline production was just slightly higher this summer than in the previous years. Moreover, the US exported less gasoline between March and July than one year ago, according to the EIA.

…but is attributable to distillate production in particular

Strong demand for distillates in and outside the USA

This is mainly the result of higher domestic demand and robust demand for distillates from abroad. Distillate demand from US consumers was 10% higher than last year during the summer months and 6% above the average of the last five years. Moreover, the USA exported 1.276m barrels of middle distillates per day on balance in July after having reached a level nearly as high in June (chart 4, page 3). Daily net distillate exports were almost twice as high in June and July as in the first four months of the year and also 26% above the same period last year. Weekly estimates from the US Energy Information Administration also indicate that distillate exports remained at a similarly high level in August and September.

Refinery activity is unlikely to sustain these exceptionally high levels

US refineries have benefited from cheaper crude oil from the country’s interior until recently, which, thanks to new pipeline capacity, can be transported to the US Gulf Coast, where roughly half of US refinery capacity is situated. This also enables US refineries to avoid the continuing restrictions on crude oil exports from the USA, since these restrictions do not apply to the export of oil products. Despite everything, US refineries are unlikely to maintain their distinctly high levels of crude oil processing of recent months, given lower margins. The EIA expects average crude oil processing of 15.3m barrels per day in the fourth quarter. This would still be more than 500,000 barrels per day above the average of the last five years, but some 600,000 barrels per day less than in the third quarter. The lower demand for crude oil from refineries indicates higher stock levels, if US oil imports are not being reduced markedly, as US oil production is likely to increase further as a result of the surge in shale oil production in North Dakota and Texas. In fact, the decline in US crude oil stocks seems to have come to an end. In the second half of September stocks were already increasing by roughly 8m barrels, due to lower volume of crude oil processing and higher oil imports.

The 13-week long decline in crude oil stocks at Cushing has also weakened visibly in recent weeks (chart 5). Whereas, between the beginning of July and the end of August, on balance an average of 1.36m barrels of crude oil per week were drained off Cushing, in September the figure had fallen to an average of less than 500,000 barrels per week. At the end of September, the decline in stocks at Cushing had almost come to an end. Should stocks be built up also at Cushing in the weeks ahead, this would not be attributable to a lack of transport or processing capacities. These are now sufficient – as the steady fall in Cushing stocks over the summer months despite rising shale oil production in the Midwest demonstrated. In fact, once the Southern leg of the Keystone XL pipeline is completed, additional transport capacities of 700,000 barrels per day will be available by year-end. A stock build-up would instead be attributable to lower crude oil processing at refineries. This should exert pressure on the WTI price in particular.

Record US distillate exports creating problems for refineries in Europe

What are the implications of these trends for Europe? According to data from the EIA, the USA was already exporting record volumes of middle distillates to Europe in May and June. Based on shipping data, this trend has continued in September. The high levels of US distillate exports will exert pressure on refinery margins in Europe. Despite low gasoil stocks, the price differential between gasoil and Brent oil has been moving in a narrow range around USD 15 per barrel for some months, which is hardly sufficient to offset the very low margins in gasoline production. The situation has been compounded by the fact that the USA itself has now become a net gasoline exporter. As a result the US market – formerly the most important sales market for European refineries – has been lost. At the same time, the USA is also competing in gasoline on other sales markets such as South America, for instance. Further refinery closures in Europe are thus on the cards, which would further increase Europe’s dependency on imports of oil products.

Price explosion for crude oil – what lies ahead?

Iran calls for action to support the oil price

Looking for Carbon to stall ahead of 6.00