In oranges and orange juice, the outlook for both supply and demand is dim. Especially in the US, a declining supply will meet with softening demand. Supply concerns were in focus for months, causing prices to rise. But disappointing US consumption data and a lack of strong storms in the south of the US turned the price movement around in the summer. Prices were able to regain ground recently as estimates see Florida’s harvest as from October at a 50-year low and California is supposed to harvest fewer oranges as well. The price for frozen concentrated orange juice, which strongly depends on the US market, will probably continue to fluctuate for a long while, driven by declining supply and similarly declining demand.

Prices for frozen concentrated orange juice on the New York exchange have not been able to sustain their month-long uptrend that was intact until June. Instead, they dropped by more than 15% between the middle of June and the first days of August. Only at the current margin could the quotations regain some ground, rising from 139 US cents to nearly 150 US cents per pound. Though the two-year high of mid-June at 167 US cents per pound is still some ways away (chart 1). 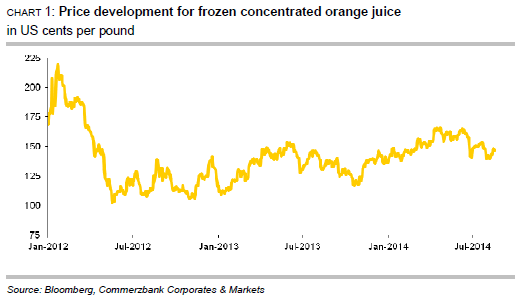 The focus was therefore very much on the supply side. The month-long price rise until June had been triggered by prospects of a lower US supply. In fact, the last harvest in the US was already unsatisfactory. In its July report the USDA once more reduced its estimate for the 2013/14 US harvest compared to its last forecast from January. It now envisages only 6.3 million tons of oranges, 16% less than in 2012/13 (chart 2). This is the second large consecutive decline. The plant disease citrus greening, which causes the fruit to drop prematurely, still maintains its grip on large parts of the growing regions. As a result of the lower harvest, US orange juice production should come in at 481,000 tons, 20% below 2012/13 levels, which were already lower than in the previous year. 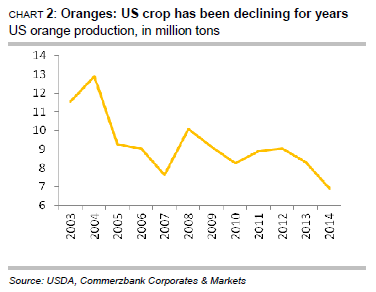 Moreover, the drought in Brazil spurred doubts as to whether rising production in Brazil would be able to compensate for the decline in the US. For Brazil, the USDA had predicted in January that the 2013/14 orange harvest would increase by 8.5%, but this forecast was cut to 6% in July. This still remarkable rise is largely attributable to high yields. The quantity of oranges used for processing is seen to rise at a similarly strong rate. As a result, Brazil’s orange juice production, which had fallen massively by almost a quarter in 2012/13, is now expected to post a 12% increase.

However, not only juice production but also the consumption of orange juice is lacking momentum. Global consumption has for years been fluctuating around the mark of 2 million tons (chart 3). Consumption is clearly declining in the US – the most important market alongside the EU. US per-capita consumption of orange juice has reportedly fallen from 46 litres ten years ago to only 35 litres in 2013. According to latest data, US retailers sold 9% less orange juice than one year before in the four weeks ending on 2 August 2014. A wide range of other juices and new developments in other beverages are now competing with orange juice. Also, many consumers prefer beverages with lower sugar content or lower prices. In other developed countries, too, the market for orange juice should be largely saturated. Double-digit growth rates in some other countries, such as China, for instance, cannot reverse this outlook, given the low absolute figures. 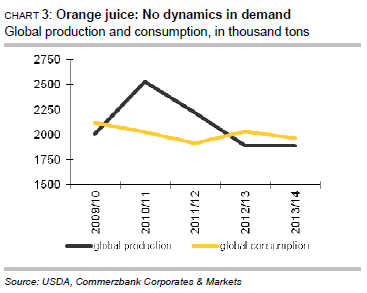 But the market is now looking less at the current year 2013/14 than at the coming season. The year 2014/2015 as measured by the USDA begins in October or November in countries in the northern hemisphere. In Brazil, by far the most important country in the southern hemisphere, it even only starts in July 2015. The first USDA forecasts are only expected for autumn. In the US, the orange harvest for 2014/15 should thus get underway in a few weeks. Prospects are far from promising. Estimates are circulating according to which Florida’s orange production, which normally accounts for about 70% of total US production, could fall to less than 90 million boxes of 90 pounds (or 40.8 kilograms) each. This would be less than 3.7 million tons, i.e. the lowest level since 1965. Since according to latest USDA data, Florida harvested 133.6 million boxes in 2012/13 and 104.4 million boxes in 2013/14, this would be a fall by about another 15% compared with the already weak current year. Not all watchers anticipate such a dramatic situation. But there is broad agreement that the harvest will likely remain below 100 million boxes. In California, the only other important growing state in the US, the drought will presumably leave its mark. The situation there has been difficult since 2012 and has become further exacerbated in recent weeks, and more than half of the acreage currently falls in the highest category of “exceptional drought”. The critical outlook for US production has recently given prices a bit of a lift.

It remains to be seen whether in the present situation of weak demand the continuing decline in supply can contribute to noticeable price rises on a lasting basis. We only expect this to happen if supply shortfalls attributable to storms or diseases turn out even larger than currently expected. Fears of a marked hurricane season have driven up prices often already. This year has been relatively calm so far, but the hurricane season only ends in November. Hence, stormrelated crop losses in Florida are still a possibility.

Price explosion for crude oil – what lies ahead?