On 30th November Switzerland will hold a “Save our Swiss gold” referendum. Should the petition turn out to be successful the Swiss National Bank would have to buy large quantities of gold and would be limited in its monetary policy. The market (and we as well) considers it unlikely that the petition will be successful. As a result the market reaction would be considerable if the referendum passes.

What is it all about?

The initiators of the petition “Save our Swiss gold” are of the view that only “gold can be the foundation of a stable franc”. So as to cement these foundations they demand a change of the constitution in the following points:

Within two years of the referendum being passed the Swiss National Bank (SNB) has to return its gold reserves to Switzerland and has five years to reach the minimum requirement of 20%. The organisers of the petition argue that this is the only way of ensuring the independence of the central bank and the long term stability of the Swiss franc. The reason they state is the strong rise of the SNB’s balance sheet. Since the beginning of the financial market crisis six years ago the balance sheet has risen more than fourfold to CHF 522 bn. (chart 1). An important factor in this context is the introduction of the franc’s minimum exchange rate against the euro on 6th September 2011. The latter ensures that the exchange rate cannot ease below 1.20 francs per euro. In order to defend the minimum exchange rate the SNB had been forced to buy considerable amounts of euros over the past years. Since the introduction of the minimum exchange rate the balance sheet has risen by 40%, with the majority of this rise taking place between September 2011 and September 2012. With the easing of the Euro crisis the appreciation pressure on the franc was reduced and therefore SNB’s interventions subsided notably. However, should the ECB begin buying government bonds on a large scale next year the appreciation pressure on the franc is likely to rise again. This would also increase the likelihood of renewed SNB interventions, which in turn would lead to a further expansion of the SNB balance sheet. 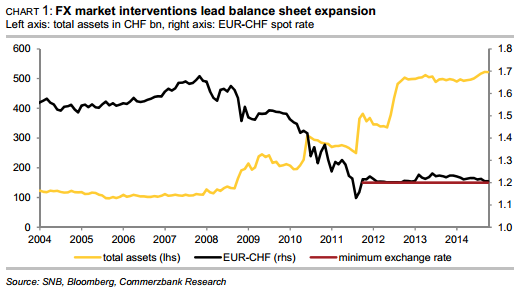 The petition demands damage the credibility of the SNB

The petition demand to hold all SNB gold reserves in Switzerland does not limit the SNB. The main advantage of geographically distributing the gold reserves, the possibility to sell the reserves quickly, would become redundant as a result of the ban on selling gold. And as the reserve can no longer be sold in the event of a crisis it no longer constitutes a reserve in the stricter sense and therefore it does not matter whether it is distributed around the globe or sunk in one of the Swiss lakes. If the gold reserves cannot be sold they are “lost” for the Swiss economy and for supporting the franc. However, what does the combination of the sales ban and the 20% minimum gold share in the reserves mean for the SNB’s monetary policy? These two demands limit the central bank’s monetary policy scope considerably and make it more difficult for the SNB to fulfil its mandate: price stability in the sense of a rise of consumer prices of less than 2% per annum.

The market would be aware of the SNB’s dilemma, so it would constitute the perfect invitation for the market to bet against the SNB. It would open the door to speculators. The difficulties can easily be illustrated by explaining the significance of the petition demands for the EUR-CHF minimum exchange rate of 1.20.

The SNB introduced the minimum exchange rate to prevent the additional deflationary pressures caused by the appreciation of the franc. The most important reason behind its success is the SNB’s credibility that it would sell unlimited amounts of francs should that be necessary. The SNB would lose this credibility under the conditions of the gold initiative. In this context two factors are important for speculators:

However, short term a positive outcome of the referendum would have little effect on the EURCHF exchange rate. Following the vote the SNB would have five years to meet the minimum requirement of 20% gold holdings. So for the time being it would be able to sell unlimited amounts of francs to defend the 1.20 exchange rate – and it would no doubt do so. It would do so to send out the clear signal that it can and will act.

As long as the SNB sticks to the minimum exchange rate it is clear though that it would not be able to achieve the requirement to hold 20% gold by contracting the balance sheet. So if the gold initiative was to be successful the SNB would therefore be required to buy substantial amounts of gold, in order to reach the required share of 20% of gold in its assets. This would clearly influence the gold price.

Gold initiative might constitute the turning point for the gold price

As a result of the SNB’s balance sheet expansion the share of the gold reserves in the total balance has fallen continuously over the past few years. Until mid-2008, i.e. before the start of the financial market crisis, it still accounted for more than 20% – the level that the gold initiative would like it to return to. At present the gold holdings account for less than 8% of the balance, sheet without the amount of gold being held having changed during this time (chart 2 and chart 3 below). Since 2008 the reserves have always amounted to 33.44 m ounces (1,040 tons). At current gold price levels this corresponds to CHF 39bn For the gold share to reach 20% again, as demanded by the gold initiative, it would have to rise to CHF 104.5 bn. as long as the total balance remains unchanged. Assuming an unchanged gold price the SNB would have to buy 56.3 m ounces (which corresponds to approx. 1,750 tons) of gold. That would exceed the holdings of all gold ETFs tracked by Bloomberg (chart 4) and would correspond to approx. 60% of the annual global mine production. 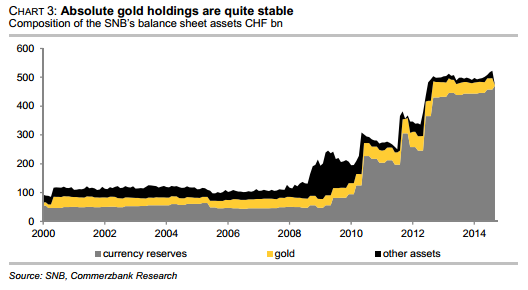 Due to the many parameters it is difficult to give the exact purchasing volume required. The SNB balance sheet is likely to increase further next year if the ECB starts its broad-based bond purchases. Under these circumstances the SNB would probably be forced to once again purchase euros so as to defend the minimum exchange rate. So if everything else remains unchanged even larger gold purchases would then be necessary. On the other hand it seems likely that should the referendum end in a win for the gold initiative the gold price would rise. A rise in the gold price on the other hand would lead to a value based increase of the gold reserves’ share of the balance sheet. So that would mean the SNB has to buy less gold. A fall in the gold price would increase the required gold purchases but this is unlikely in view of the market expectations of imminent massive SNB gold purchases.

How pronounced would the price reaction in case of a vote in favour of the gold initiative be? The reaction of the gold price following the announcement of gold purchases by the Chinese and Indian central banks in 2009 might provide an indication. When the Chinese central bank announced in late April 2009 that it had increased its gold holdings by 454 tons in the previous 6 years the gold price rose by 6% within one month (chart 5). When the Indian central bank purchased 200 tons of IMF gold, a transaction that became public in early November 2009, this caused a price rise of 15% within one month. The even larger amount of gold the SNB would have to buy suggests that the price would rise at least by a similar magnitude. On the other hand the clearly more negative market sentiment compared with 2009 points in the other direction. At the time the gold price had been in a 7-year uptrend whereas it has been in a downtrend for three years now (chart 4).