Oil prices are recovering somewhat from the lows they hit at the beginning of the week. Brent now costs more than $50 per barrel again, while WTI is priced at above $46 per barrel. The price recovery is finding support from a sharper than expected fall in US crude oil and gasoline stocks, as reported by the API after close of trading yesterday. The US Department of Energy will be publishing the official inventory data this afternoon, the focus no doubt being also on US crude oil production. If it should turn out that the marked decline in production in the previous week was merely a flash in the pan, oil prices are likely to come under pressure. The considerable oversupply makes it unlikely that the price recovery that has been underway since yesterday will prove to be a lasting price increase.

Mainly as a result of the weak import pull of China in the first half of the year (-37.5% year-on-year), the coal price in Europe finds itself just above its 6-year low posted in mid-January at $55.5 per ton. US President Obama’s “Clean Power Plan”, which contains somewhat tougher regulations than last summer’s original plans, is additionally weighing on prices. The ambitious targets for renewable energies and the goal of reducing harmful emissions by making coal-fired power stations more efficient and stepping up the use of gas-fired power plants mean that the demand for coal in the US will shrink considerably in the long term. That said, it should not be forgotten that a new government could reverse this controversial plan. Any recovery of coal prices will depend not only on essential production cuts, but above all on the (import) needs of emerging economies, which should pick up again, at least in the medium term. 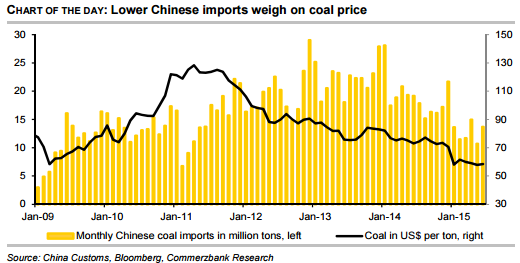