Crash on the gold market

Crash on the gold market – as the new week gets underway, the price of one troy ounce plunged for a time by up to 5% or around $50 to just over $1,080 during the course of early trading, thus hitting its lowest level since February 2010. It has meanwhile recouped over half of these losses again. In euro terms, gold dipped temporarily to a 6½-month low of a good €1,000 per troy ounce. The price slide was triggered by high selling volumes on the gold exchange in Shanghai. According to figures from Reuters, over a million lots were traded there in one key contract. Apparently, the average figure so far in July had been below 30,000 lots. Speculative financial investors on the COMEX were already showing increasing pessimism even before the latest price slide. For the first time since the data series began in mid-2006, net short positions totalled 1,100 contracts in the week to 14 July – by now they are likely to be significantly higher. ETF investors are also further retreating: holdings in the gold ETFs tracked by Bloomberg saw outflows of 15.7 tons on Friday, their sharpest daily decline in a good two years, which now puts them at their lowest level since March 2009. The fact that Greece is to receive a bridging loan from its creditor countries and that banks there are open again from today is of merely marginal interest, as are the gold purchases by the Chinese central bank. The latter had announced on Friday that it topped up its gold reserves by 604 tons to 1,658 tons in the past six years. All other precious metals are also under pressure in gold’s slipstream: silver has been trading for a time at a 7½-month low of $14.5 per troy ounce, while platinum dropped for a while to a 6½-year low of less than $950 per troy ounce and palladium hit its lowest level since October 2012 (a good $600 per troy ounce). 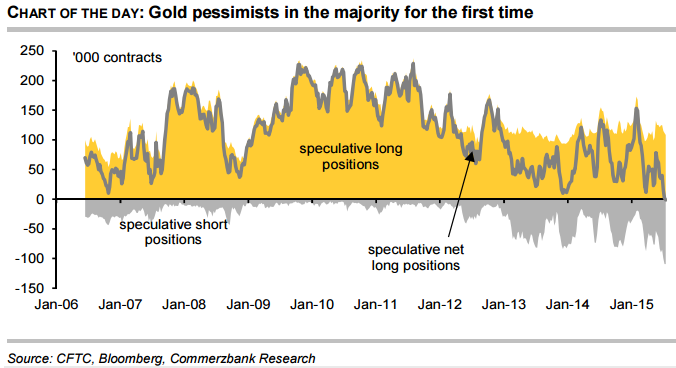