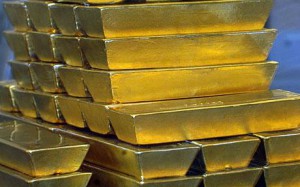 As noted, gold put on 3% in the week, to close at $1613/oz, thanks to its now usual Friday flurry. That this was its best effort despite Spain teetering on joining Greece in the emergency room still fails to underscore the next leg of a bull market. Spain is much more important than Greece. Its GDP of c. $1400bn dwarfs that of its fellow sufferer ($350bn) and its crisis is more defined. It is a property crash which has left its entire banking system exposed. Platinum holds its ground ($1438/oz) largely on the threats of closure and development slowdowns in RSA turning to reality. Silver, meanwhile, has resumed its place in the third class carriage.

Central Bank Buying. The recent purchase figures are relatively small and not by major countries but they are nonetheless trend indicators. According to the World Gold Council CB purchases were 450 tonnes in 2011, about 17% of newly mined supply and could be 400 tonnes this year. Noted as recent buyers were: Turkey 29.7t, Mexico 2.92t, Kazakhstan 2.02t, Ukraine 1.4t, the Philippines (in March) 32t.

It is hoarding that counts. If, as we broadly believe, there are 140,000t of gold on the surface of the earth, but only 30,000t in bank vaults. The balance, c. 80% is under peoples’ beds or round their necks. We explained last week why this individual buying is largely an eastern thing. If the Indians only had a Rupee crisis to match the Euro you would see the price orbit. We know the Chinese are becoming increasingly fond. Now enter Vietnam. That country, which pays lip service to Communism and shares a long border with China, has major natural resources potential. Its rapidly growing population of c. 90 million with a GDP of $3100, just down from India ($3500). It also has rampant inflation and a taste for gold. The Vietnamese people have been buying gold to preserve their purchasing power and are said (Mineweb reports so it must be right) to be holding upwards of 1000t, second only to India. Now, we think the government, via the State Central Bank, wants to “mobilise” it. Just like Roosevelt, Hitler and Harold Wilson did. They speak of tradable gold certificates and we wish them well. At least Dick Turpin wore a mask.

Peru’s illegal gold exports. That mineral-rich country ranks No 6 world gold producer at c. 160t of which, says a report by a locally based consultancy firm, over 20% is exported illegally. Veterans of that continent would be tempted to ask “Why so little?” It goes on to say that this activity has now overtaken the drugs trade in turnover. We are reminded of a statement in a newspaper in the Maldive Islands which told us that car accidents had become the greatest single source of personal injury, replacing coconuts falling from trees.

Psst…Wanna buy 1700 tonnes of gold? The CEO of Sharps Pixley. Ross Norman, knows a thing or two about gold and is normally cautious with his forecasts. Last week he floated the possibility of the metal becoming a Tier 1 asset for commercial banks with a 100% instead of its present Tier 3 rating of just 50% risk weighting. He goes on to tell us that banks will, from early 2013, have to have a Tier 1 capital ratio of 6%, up from today’s 4%. That extra 2% (of the total Tier 1 requirement of $4276bn) equates to 1700 tonnes at current prices. We speak, of course, of commercial banking – that source of our woes – not the central ones.

Platinum miners and a reality check. As the gold price is buoyed by fear, the platinum price is bounded by industrial reality. Demand is down and output is up. A major surplus overhangs the market and the current level of $1438/oz owes more than much to the long term relationship. Yet the platinum to gold ratio of 1.24, 30 months ago, is under 0.90 now. Will it improve? The mining companies are feeling the pain and are starting to cut back. Eastplats (TSX, JSE) has suspended funding for two RSA projects, one the Maresburg open pit and the other the Kennedy’s Vale concentrator. The company sees no increase in demand in the foreseeable future. It reported a loss of $76.5M in 2011 compared with a profit of $13.4M in 2010. This is a company in a hole and it is trying to stop digging.

Impala Platinum, the World No 2 at 47.2t/yr has been plagued at its Rustenburg, RSA operation by wage disputes and illegal strikes. Its output in the March 2012 quarter fell 46%, to 230,000oz (7.26t) from 13.2t in like 2011. Its strikes have been accompanied by violence, much the result of battles for supremacy between rival unions.

In contrast Zimplats, subsidiary of the above, recorded a 7% rise in production in Q3, to end March 2012. Output was up to 45,000oz from 42,000oz. It puts a brave face on its expansion plans to increase to 270,000oz by 2014, but is this hay while the sun shines and before Uncle Bob’s mates hive off 51%? The latest edict seems to imply that 31% of this will be bought for cash at fair market value. Bets anyone?