Energy: Thanks to the positive mood on the financial markets, oil has regained the ground lost on Monday. Brent rose $2 yesterday to reach $117.2 a barrel for a time, hitting a new 4½-month high. Any drop in prices is evidently being seen by market players as a chance to buy at present, suggesting further gains. According to API inventory data, US crude stocks increased by 3.6 million barrels last week, somewhat more than envisaged, whereas crude stocks at Cushing fell by 24 thousand barrels. The reduced throughput capacity of the Seaway pipeline is evidently still sufficient to prevent stocks at Cushing from building up.

The next few weeks will reveal how long this will last, given the continuing rise in shale oil production in North Dakota and limited refinery capacity in the Midwest. At present, US crude stocks are at a 31-year high for this time of year. The price of WTI is suffering accordingly. It came under pressure when the API inventory figures were announced, and is now trading at under $96.5 a barrel. The difference between Brent and WTI clearly reflects the discrepancy in oil price developments. The gap this morning has widened to more than $20, the biggest since December. This afternoon the US Department of Energy will be publishing its official inventory data. With low capacity utilisation and rising crude imports, they too are expected to reveal another rise in stock levels.

Precious metals: According to figures provided by the Census and Statistics Department of the Hong Kong government, China imported record quantities of gold from Hong Kong in December. Year on year, imports were up to 114.4 tons, almost trebling. At the same time, “only” 19.6 tons of gold were exported to Hong Kong, the smallest volume since February.

The figures suggest strong demand for gold within China itself. Over the year as a whole, China imported a net quantity of 557.5 tons of gold from Hong Kong, likewise a record and 47% up on 2011. If it is assumed that China itself produced almost 400 tons of gold last year, the total Chinese gold demand will have been over 950 tons, which would mean that China had overtaken India as the world’s number one consumer of gold on a yearly basis.

Owing among other things to higher duties on gold imports, Indian gold demand is likely to have fallen last year to just over 700 tons. China is thus filling the gap left by India. With China’s population getting increasingly wealthier, demand for gold should remain high, and since the country cannot meet demand from its own gold resources, and the central bank is topping up its gold reserves, gold imports can be expected to remain at a high level, which should support prices. 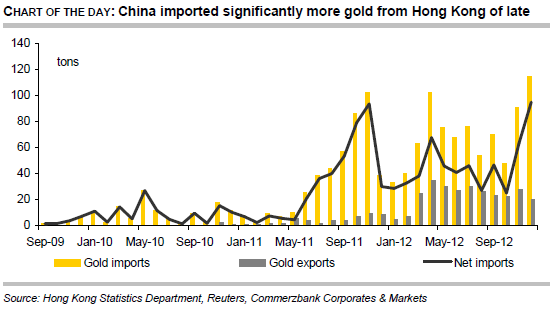 This article is published on Råvarumarknaden.se with permission from Commerzbank AG