According to the Saudi-Arabian Oil Minister al-Naimi, Saudi Arabia, Kuwait, the United Arab Emirates and Qatar are in agreement ahead of today’s OPEC meeting. This drove oil prices to new four-year lows because in all likelihood these four countries will reject any production cut. Brent meanwhile costs only just above $76 per barrel, while WTI is priced at below $73 per barrel. The great majority of market participants now assumes that OPEC will not reach any significant agreement. 38% of those market participants surveyed by Reuters expect – just as we do – that OPEC members will reach merely a minimal consensus, namely to comply better with the current production target of 30 million barrels per day. 20% of those surveyed do not even expect this to be achieved. Only 22% anticipate a production cut of up to 1 million barrels per day or more – despite this being precisely what is needed to ensure that the oil market is not significantly oversupplied. After all, both OPEC and the International Energy Agency estimate next year’s call on OPEC at just 29.2 million barrels per day. At present, OPEC is producing just shy of 31 million barrels per day. Reuters and Bloomberg will be publishing their November production surveys tomorrow. In view of the low expectations in the run-up to the OPEC meeting, the price is likely to rise more sharply in response to any unexpected more pronounced production cut than it would fall in response to any anticipated failure of OPEC to agree to reduce production. In the latter case, Brent would doubtless fall to $75 per barrel and WTI would probably decrease towards $70 per barrel. 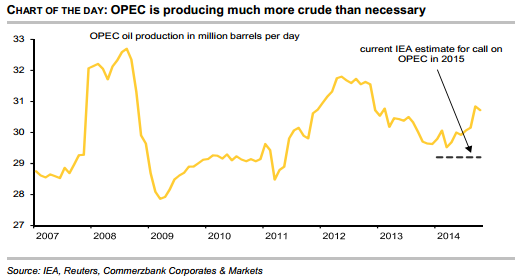 Continued headwind for gold and silver from money managers