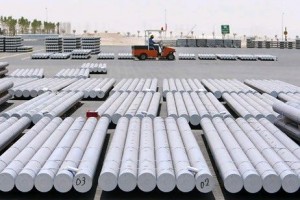 Whilst warehouse stocks scarcely stirred, prices for choice moved up, not much, but up. The involved producers all talked a good game. Rio Tinto said we shall face a supply deficit in aluminium in 2013. Alcoa says we are going to make car bodies out of that lightweight metal. Barclays Bank says commodity prices are in ‘no mans land’. S&P says there are rough times ahead for nickel and zinc. Who to believe and does it matter? Good thing it is not serious. Aluminium: just to remind, the world’s largest producers are:

Rio says the high cost capacity cuts this year will give us a supply deficit in 2013. There has been zero growth on the supply side for some years, only low energy cost producers are in with a shout and the high cost ones are baling out.

Alcoa took 500,000t out at the start of this year, Norsk Hydro did 180,000t and Rio is also cutting back. But this is a 40Mtpa market with almost 5Mt in LME warehouses. Now, Alcoa is building a 740,000 tpa smelter in Saudi Arabia and China, 40% of world metal production, is producing regardless.

Aluminium Car Bodies. Not a new idea this. The reason why most units of Britain’s iconic Land Rover, first produced in 1948, are still running is that they had aluminium bodies. Its availability arose from the scrapping of wartime aeroplanes.

Not only was it cheap, it was, and still is, more malleable and lighter than steel. Rustproof, too. Then it became expensive when fuel was cheap and weight not a consideration. So steel took over. Now fuel is expensive and aluminium is relatively cheap again. Alcoa (No 2 in the metal’s production) says aluminium is making a comeback and its demand in the automobile market will double by 2025. Current demand is c 11.5 Mt out of a total usage of 40Mt or almost 30%. The other end uses will not go away so this could become an extra 12Mtpa. We presently have an oversupplied market, but the lead time to new mined and refined production can be up to 10 years. The current price languishes below $2000/t having seen almost $4000/t in 1990 and $3000/t in the heady 2006-9 period. Neither might this move please the carmakers if their units last 40 years instead fo 20. Gnashing of teeth, too, from the zinc miners whose major outlet is galvanising steel to rustproof it. This is one to watch.

Nickel, too, is in oversupply so mixed reaction to news of what might become a major mine in South Africa’s Bushveld Complex, home to most of the world’s platinum. Announced by AIM-quoted URU Metals (URU.L 5.25; Hi-Lo 11.0p-4.5p), they speak of 25,000 tpy metal at a price (quotes Mining Weekly) of almost $4/lb including CAPEX. That is about $8500/t compared with a current $16,600/t, itself a long way from historic highs. Buoyed by this they speak of an IRR of 25.7% and a 3.8 year payback. URU’s two partners are South Africa Nickel and BEE group UNMEX.

We were treated to mixed views on Zinc this week, the bullish one from Selwyn Resources which has a mega, low grade deposit in Canada’s Yukon Territory. The Selwyn story is based on the rapid rate of closure of some historic, high grade mines, particularly in Canada and the dearth of replacements, which it intends to rectify. As ever, the Chinese position is they key. That country is the largest metal producer (31% compared with No 2 Peru at 12%), consumer (43% vs the USA, next at 7%) and 3rd largest importer at 10% following Germany and USA. It shows little sign of abating but this has not reduced the near record level of warehouse stocks. Mining of zinc outside China has become two-way traffic. Anglo and Exxaro are exiting. The latter has completed the R931M ($110M) sale of its Namibian, Rosh Pinah mine to Glencore. That company is already the most potent force in zinc marketing. Should its merger with Xstrata take place, the combined group would control c.15% of world smelter production. That alone does not signify success; ask Rio with its grip on the aluminium market.

The London Metal Exchange, the oldest and largest of its type, has been bought by Hong Kong Exchanges and Clearing. They paid £1.4bn in a deal concluded Friday June 15th 2012. Now it should be upwards and onwards, with warehouses and open trading in China. Whilst the LME is big in physical metals, through its international network of warehouses, it also transacts about 20% of the futures business. The Chinese have always been a bit dubious of futures, considering them speculative. Wait until they get the hang of it. 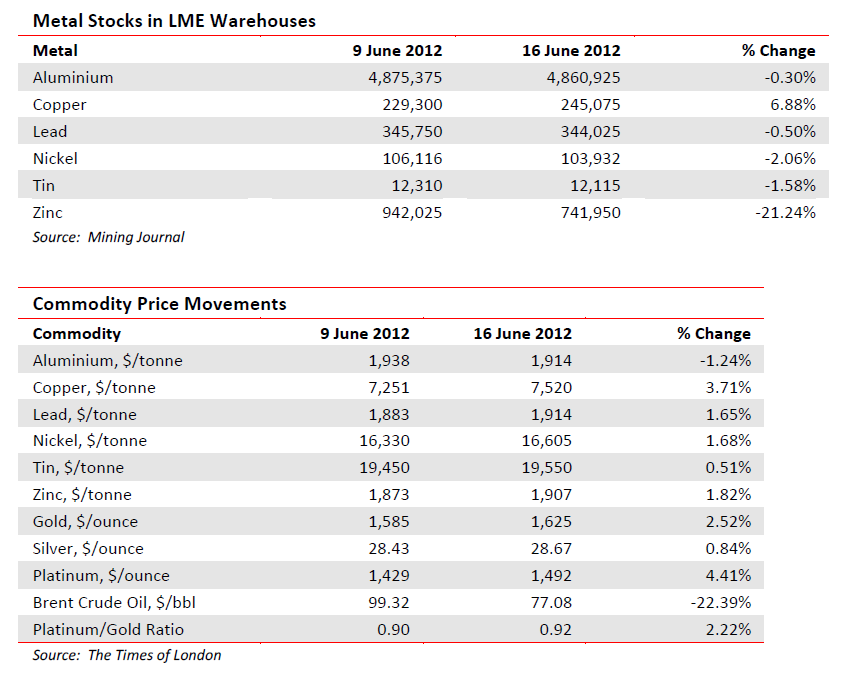 Related Topics:aluminiumdavid hargreaves
Up Next