Oil continues to make a sound recovery, and has risen this morning for the fourth consecutive day. During the last two trading days alone, Brent has gained more than 11%, the biggest two-day rise since the beginning of 2009. It is trading this morning at almost $57 a barrel, a level last seen a month ago. The same is true of WTI, now at $51 a barrel. There has been a basic change of sentiment on the oil market over the past few days. It is evident in the market’s response to the US refinery strike, which for three days now has shut down 10% of the country’s processing capacity. The strike was one reason for prices rising yesterday, as the resulting decline in supplies of oil products pushed up the crack spreads sharply. The gasoil-Brent spread, for example, increased by more than 30% yesterday. Two weeks ago, news of a strike in US refineries would have caused a strong price dip on account of the resulting rise in crude inventories. It’s all a question of the market’s sentiment. In the week to 27 January money managers increased their Brent net long positions by 1,900 contracts to 129,700 contracts. WTI contracts were down 2,000, but at 203,700 contracts they are still at a very high level. Moreover, WTI saw a marked rise in long and short positions. In the reporting week, short positions reached their highest level since August 2010. The latest price rise is therefore probably due to short-covering. 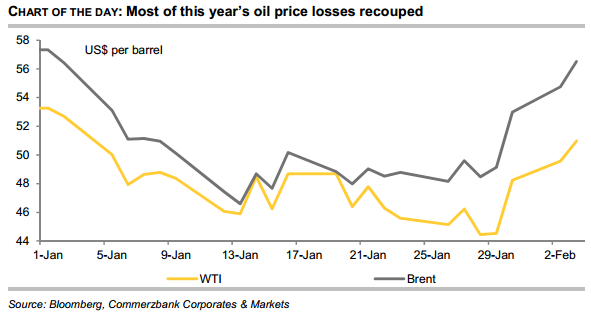 Brent fell to a good $88 per barrel overnight