The above figures are already impressive by themselves but they also are the basis for what the company means to say with its slogan “Value Creation Beyond Gold”. 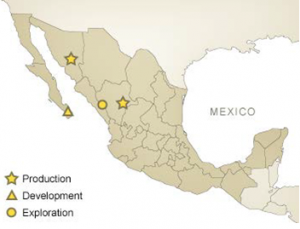 As management has shown since they commenced their involvement with the company two and a half years ago, Argonaut Gold is not only designed to be about gold but also about the benefit of the shareholders. For investors that participated in the IPO at C$3,00, the shares have turned out to be a very rewarding investment, outperforming gold itself and the averages of gold mining shares in general. Management is dedicated to continue to accomplish this through growth of production, growth of resources, growth of margins, controlling the cast cost of production, and returning a yield to the shareholders by paying a dividend.

In my heading, I mentioned the growth of production from the estimated 90,000+ ounces of gold to more in 2013 and 2014. In its company presentation, Argonaut Gold’s management included graphics of its “Future Value Drivers” where they mention about 300,000 to 500,000 ounces of gold production per year as target. This production has to come from the company’s primary El Castillo heap leach mine, situated in Durango State, the past producing La Colorada mine in Sonora State, which came on stream again this year, and the San Antonio gold project on the Baja California Peninsula, all in MEXICO. The total gold resource currently exceeds 6.2 million ounces in the M&I category and 213,000 ounces Inferred. The La Colorada project holds a notable silver resource as well. 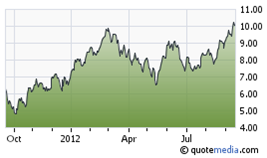 The share capital of Argonaut Gold is very tightly held with institutional holdings accounting for 86% and management for 6% of the total. The company has the intention to build a larger group of individual shareholdership, reason to bring the quality and potential of the company and its projects to a wider and more international audience. I am very pleased welcoming Argonaut Gold as a new Supporting Company because it is a true and promising exponent of the new generation of gold producers. Looking at a future of continued and growing attention for gold and silver and in particular for mining and exploration shares from international investor audiences, I am confident that the shares of Argonaut Gold will find their way into quite many international portfolios. They indeed have a lot of good to offer! In a few weeks time, you will get more information in my Initiating Coverage Report.

This concludes this issue with the review of my impressions of the two events I attended in Beaver Creek and Denver, Colorado in the last two weeks. Because I feel we are in a time that gold has started a new upward leg of the long-term bull market which is likely to last over the next few years, a time that will allow the mining companies to experience and enjoy very profitable margins and will stimulate the exploration companies to find and develop their prospective projects, I decided to share not only the positive feelings I found at the events but also the names of the several companies that I got to know better and found interesting. Consider it as my stimulus to you to position your investment portfolios to properly benefit from what, in my opinion, is coming!