Oil prices hit new 5½-year lows yesterday. Brent cost $58.5 per barrel for a time, its lowest level since July 2009. At its lowest point, WTI was trading at $53.6 per barrel, the cheapest it has been since May 2009. The Arab OPEC states in the Gulf region still see no reason to convene an extraordinary OPEC meeting. Instead, they are willing to wait for six months or even a year until the market stabilizes. Kuwait estimates the current oversupply on the oil market at 1.8 million barrels per day. Since OPEC is doing nothing about it, any attempt to reduce this oversupply must be made mainly by non-OPEC producers. Russia yesterday ruled out any cut in output – this would not be any real alternative given the massive slump in the rouble and the country’s financial problems, and would in any case be difficult to achieve technically due to a lack of storage capacities. The producers of shale oil in the US and oil sands in Canada will therefore have to play a key role on the supply side. Oil prices are only likely to recover once there are visible signs of production slowing there. In the coming weeks we will therefore be closely watching the US oil production data which are published as part of the US Department of Energy’s weekly inventory statistics. US oil production was still rising recently and in the latest reporting week achieved 9.1 million barrels per day, which is its highest level since the data series began more than 30 years ago. According to the US Energy Information Administration (EIA), the price slide is only likely to be reflected in lower production growth in the second half of 2015. 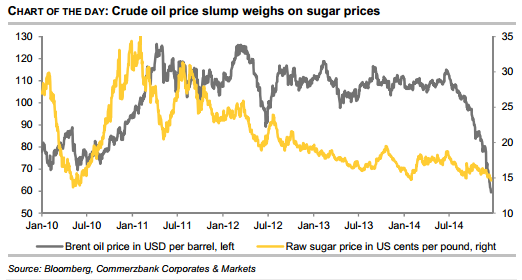 Gold – Minor bounce is being seen