Oil prices surged by 18% within three trading days, the sharpest rise in six years. OPEC’s strategy to push US shale oil producers out of the market appears to be working. In the short term, the price rise is exaggerated as there is still a substantial oversupply. We continue to expect a sustained price recovery in the second half of the year. 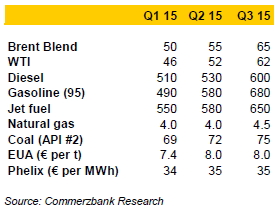 Oil prices soared by 8% on the last trading day of January and continued their high-altitude flight in the first two trading days of the new month. The price of Brent rose to $59 a barrel at its peak, WTI to $54 a barrel. As a result, this year’s price losses have been reversed completely. The price rally of almost 18% within three trading days was the sharpest rise since the beginning of 2009, when the price surged by 25% within four trading days. The recent price spike was probably triggered by data from oil service company Baker Hughes on drilling activity in the US. The number of active oil rigs shrank by 94 last week, the biggest weekly drop since records were first kept in 1987. Since the record high of last October, the oil rig count has fallen almost continuously by a total of 24% to a 3-year low, whereby the slide accelerated in January (chart 1). Two thirds of last week’s decline was attributed to horizontal rigs which are being used in extracting shale oil. OPEC’s strategy of forcing shale oil supplies from the market via low prices appears to be working more quickly than many had expected. Market players who had bet on a further price slump should have subsequently closed their short positions, thereby strengthening the price rally. Others are likely to have jumped onto the bandwagon once the psychologically important mark of 50 USD had been overcome. The foundation for a steady price recovery in the second half of the year has thus been laid by the expected decrease of US oil production. In the short term, however, the price increase is exaggerated in our view, as there is still a considerable oversupply. This is borne out by Reuters and Bloomberg surveys which show OPEC oil output rising in January. In both surveys it is above the official OPEC production target of 30 million barrels a day, in the case of Bloomberg it is well over, at almost 31 million barrels a day. On the other hand, the demand for OPEC oil in the current year is estimated at only 29.2 million barrels a day. For the first half of the year, it is much lower still. We therefore do not view the last price leap as a trend reversal yet and still see the risk of another price fall. This was also the case at the beginning of 2009 when the aforesaid surge by 25% at the onset of the year was followed by another slide in mid-February before a sustained price recovery started in March. That said, the odds are greater now that the oil price hit its low point in mid-January at $45. Market sentiment has brightened significantly recently. Sharply rising US stocks and a refinery strike in the US have no longer been able to keep oil prices under pressure lately. 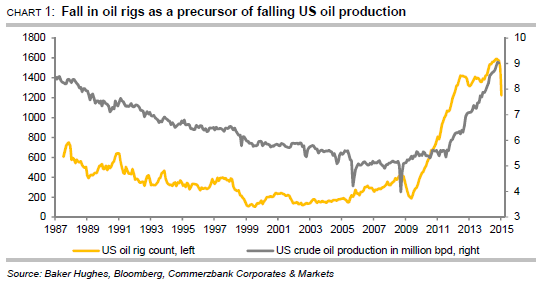 Looking for Carbon to stall ahead of 6.00