The price of Arabica coffee is trading close to a five-month low just above the 160 US cents per pound mark. The advancing harvest in Brazil is generating selling pressure, as 50% of the crop has already been brought in. What is more, dry and frost-free weather is forecast over the next few days in the coffee growing areas, which should also benefit the harvest. According to estimates of the Council of Brazilian Coffee Exporters (Cecafe), Brazil will export 32.5 million bags of coffee in the 2014/15 crop year. This would be only marginally less than in the 2013/14 crop year, when 33.4 million bags were exported, according to the US Department of Agriculture. In view of the drought-related crop damage – local coffee trader Comexim expects the Arabica harvest to decline by 13% year-on-year – a largely stable export volume can probably only be achieved by falling back on stocks. According to Cecafe’s general director, coffee stocks are ample in Brazil at present, coffee having been held back in the years 2012 and 2013 on account of low prices. All the same, he anticipates that stocks will be considerably lower in a year’s time and that Brazil will return in the coming years to a scenario of low ending stocks. This is also likely to lend long-term support to coffee prices. 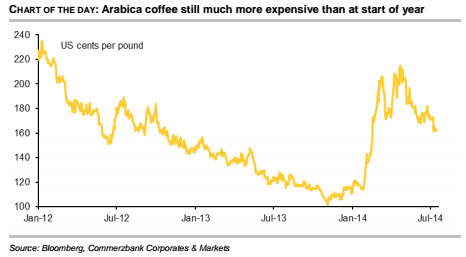