Yesterday’s report that initial jobless claims in the US had fallen to nearly a six-year low has fuelled fears that “QE3” could soon come to an end in the US, putting both the equity and the bond markets under pressure. The equity weakness can partly explain the sharp rise in gold prices despite the increase in US yields. What is more, news that the hedge fund manager John Paulson had halved his gold ETF holdings could have prompted investors to get back into the market. After all, this signals a kind of capitulation on the gold market, which should therefore be “cleansed” of any remaining optimism and excessive speculation. However, it is also possible that gold was pulled upwards by silver this time.

Yesterday alone, the silver price surged by a good 5% to achieve a three-month high of over $23 per troy ounce. In other words, the white precious metal has gained by nearly 19% within the last eight days of trading. Its price rise was accompanied by a huge increase in silver ETF holdings, which have meanwhile reached a record level of nearly 20,000 tons. The silver ETFs tracked by Bloomberg have recorded inflows of 674 tons since the beginning of the week alone, including their highest daily inflow (447 tons) since mid-January. In contrast to the gold ETFs, the holdings of silver ETFs have increased by 975 tons since the beginning of the year. Coupled with a recovery of industrial demand, which accounts for more than 50% of total silver demand, this could lend support to the silver price. 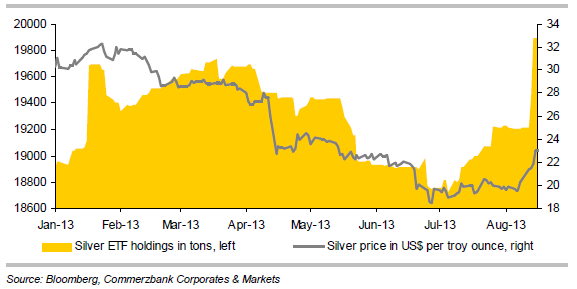