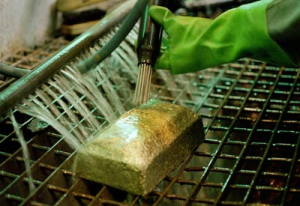 The Gold Camp is in mild turmoil. Those whose reputations are at stake are pouring some rather expensive oil on some rather troubled water, to explain that the recent retraction is but a hiccup. (Note we avoided saying “flash in the pan”?). To remind ourselves, the all time high of $1921/oz in 2011 became $1707/oz by March 9th, having suffered 3 weeks of losses. What has caused it?

Ever felt you were all alone out there? The shares are certainly not taking the lead now, are they?

Gold Shares. An interesting slant on the relative value of gold shares versus the metal. Franco Nevada’s Chairman, David Harquail says low ratings are all the gold miners’ fault when compared with ETFS. We think he has a point. Mining companies are quick to blame the volatility of the gold price on the poor share performance, but let’s ponder. If you have a single entity mine, with a quantified resource, planned output and mine life, you can do a valuation. Then the gold price kicks in. But if you pay a regular and measurable dividend to end-of-life, you almost have a Government bond with a life yield, plus a bit of fun. That’s how it used to be. Now you have companies chasing rainbows, multi-nationalising, adding political risk to mining risk and wondering why they are poorly rated. Anybody out there listening?

The Platinum Story Will Run. Even as the chaos in South Africa, home to 60% of all PGM output intensifies, Zimbabwe, No.3 at 5%, but with s-o-o much upside, tightens the screws on No.2 miner Implats via its local subsidiary Zimplats. The Zim Government, without the blessing of coalition Premier, Mr. Tsvangari, has apparently cast in stone its demand for a 51% local shareholding in all foreign and white owned companies in that benighted land. Leading the charge is Empowerment Minister Saviour Kasukuwere (doesn’t say who he has come to save but knows who his disciples are). He has now apparently called Zimplats bluff. If they do not comply by March 13th he will get heavy. Which means what? Now Implats could ride this. They stand to benefit by the inevitable reorganisation of the RSA industry. But can Zim survive it? They cannot threaten one company alone. They have Rio Tinto, Anglo American and other heavyweights to consider. So is it all or nothing on China? We are in for an interesting week.

And run it will, Eastern Platinum (Eastplats, ELRq.L 0.12p; Hi-o 97.25-31.5p), the TSX, JSE listed South African producer gave us the horror story now becoming familiar in the industry. 2011 sales fell 30% with production down through safety stoppages and strikes. It cost almost 40,000oz of production.

Warren Buffett, who agrees with us on gold, says the metal is heading for a correction and that all bubbles eventually ‘pop’. He warms to his theme, telling his Berkshire Hathaway shareholders “What the wise man does at the beginning, the fool only does at the end”. Put another time-tested way, two thirds of the people get in when two thirds of the rise is over.

Red Lake Rises Again. The northwest Ontario goldfield rush of the 1920’s ranks alongside the greats, particularly for the grade of ore. Campbell was for many years the world’s richest, alongside Madsen, Dickinson and Cochenour. Now Rubicon is to join the ranks (TSX: RMX, AMEX, RBY). The company says it has raised enough money, $200M, to bring its Phoenix Mine on stream by end 2013 at 180,000oz/yr grading 13.37g/t. Before jealousy creeps in it drops to 70 below in winter and the mosquitoes eat you alive in summer. They speak of an NPV of C$433M at an $1100/oz gold price. Agnico Eagle has a 9.2% stake and the right to farm-in to further discoveries.

Foot in Mouth Disease? Marc Faber, he of Gloom, Boom and Doom Report, says that the gold correction may not be over, but that corrections of 40% are not unusual in a bull market. So we transiently saw $1921/oz. Deduct 40% and you have $1153/oz. That, Mr. Faber is the sound of compressed air escaping at speed from your rear tyre.