Gold is trading at around $1,245 per troy ounce this morning and is thus profiting hardly at all from what are once again extremely robust Chinese import data. According to figures from the Census and Statistics Department of the Hong Kong government, China imported 131.2 tons of gold net from the former British crown colony in October. This is five times more than the previous year’s figure and only five tons below the record net import volume achieved in March. China has thus imported more than 100 tons of gold from Hong Kong for the sixth consecutive month. Since the start of the year, net imports have totalled 987 tons, meaning that China is very close to exceeding the 1,000 ton mark. The very high imports are primarily an expression of China’s undiminished appetite for gold. Traders and jewellers continue to seize every opportunity to buy gold in response to noticeably increased demand among retail investors for jewellery, coins and bars in the wake of the price fall. With the season of highest demand just around the corner, China can be expected to import large quantities of gold in the coming months too. Part of the gold imports may also be attributable to some Chinese banks trying to meet their import quotas before the year’s end, however, as they risk being assigned lower quotas by the central bank next year if they do not fully use up this year’s quota. In any case, China is hoovering up the gold made available as a result of the ETF outflows, which probably means it has been removed from the market long-term. 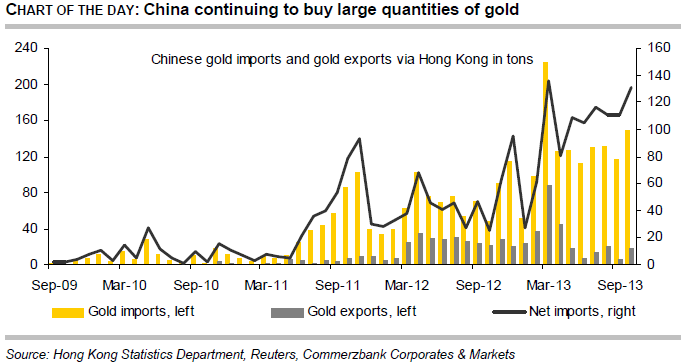