The oil market is gradually beginning to panic, as the two key oil prices have shed a further $3 since yesterday afternoon. Brent fell to a good $88 per barrel overnight, its lowest level since December 2010. WTI dropped to $83.5 per barrel and is thus the cheapest it has been since July 2012. Brent has plunged by 9% within the last two weeks and even by more than 20% as compared with its June high. The price slide has doubtless become more speculative in nature of late as the deteriorating global economic outlook, growing risk aversion and ample supply prompt more and more market players to bet on falling prices. The CFTC’s data due to be published this evening will only provide limited information given that they only reflect the week up to and including Tuesday. Iran added fuel to the flames yesterday when it followed Saudi Arabia’s lead and significantly lowered its prices as compared with international benchmarks. Just two days earlier, Iran had ruled out such a step. Thus the price war for market shares has entered its next round. This could hardly be a worse sign as far as OPEC’s external image is concerned. In difficult times, cooperation should really be the way forward. It will now be up to OPEC to halt the price slide by speaking out and, ultimately, by taking action. If OPEC maintains its passive stance, the market is likely to put OPEC’s pain threshold to the test. According to consultant firm Oil Movements, OPEC shipments are set to climb to a seven-month high in the four weeks to 25 October. This hardly sends out the right signal to the market even if Oil Movements does explain the increase by pointing to seasonally higher demand. 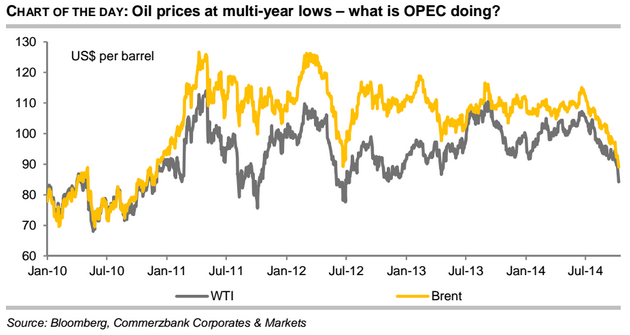 End of price war on oil market in sight?