Oil demand growth is super strong, inventories are declining, oil production in Venezuela is collapsing, renewed disturbances in Libya, OPEC+ is all in on production cuts, high probability for renewed Iran sanctions in May and booming US shale oil production recently hit a wall as there are not enough pipelines to get oil from wells to market. Still the Brent crude oil price tanked 3.2% over the past week with a close of 67.11/bl on Friday along with China – US trade war concerns.

There are thus a lot of good reasons to be bullish oil but they are currently all being Trumped by the China – US trade war concerns at the moment. Declining German imports and exports in February out this morning highlights the fact that Europe’s largest economy has hit a soft-patch. The inversion of the one-month US overnight indexed swap rate is also a bad signal from the interest rate market.

The market is currently concerned for the escalating China – US trade war tensions. And with good reason since this will be bad for global growth and oil demand growth further down the road. However, oil market fundamentals are tightening and oil prices looks set to be squeezed higher as long as OPEC+ sticks to its cuts.

Global inventories declined 18 m bl last week with declines across the board (US, EU, Sing, floating). Inventories have been rising during the first part of this year as is normal seasonally and as has been the case over the past three weeks as well. Though gains this year has been much smaller than in previous years. Last year inventories rose 112 m bl from the start of the year to mid-March. This year they only increased 43 m bl to mid-March and are now clearly in decline. As long as OPEC+ sticks to its cuts we expect inventories to decline here onwards thus leading to a renewed tightening of the crude oil spot market.

Though there are clouds on the economic horizon the latest data on oil demand growth is super strong. News out this morning from the Chinese National Development and Reform commission states that Chinese oil product consumption raises 6.4% y/y for January and February. India’s oil product demand is up close to 9% y/y in February on the back of strong growth in transportation. Also the US is experiencing exceptionally strong oil demand growth due to economic growth and cold winter weather. US Oil product demand grew 6% y/y in February. In comparison the IEA this year expects Chinese oil demand to grow at a much lower pace of 3.4% and India to grow by 6.4%. At the start of the year global oil demand growth looks like it is growing at a pace of around 2.5% y/y. That is at the very high end of oil demand growth projections for 2018. It is higher than our current 1.8% 2018 projection and way higher than IEA’s 1.5% growth projection.

Oil production in Venezuela continued its steep decline in March as it declined from 1.55 to 1.51 m bl/d. That is down 450 k bl/d y/y and the monthly annualized decline rate in March was close to the same at 480 k bl/d. PdV in Venezuela will likely have to close three out of its four refineries due to lack of crude, workers and spare parts. The recent appointment of John Bolton as US national security advisor and Mike Pompeo as US secretary of state makes it highly likely in our view that Donald Trump will revive sanctions towards Iran when it is time to waive the sanctions again on May 12. How much Iranian supply we might loose on this is hard to say but it is at least not positive for Iranian exports and will likely drive Iranian oil exports more strongly towards China and the new renminbi INE oil contract. Libya’s oil exports slipped back in March on the back of disruptions in the southwestern oil filed El Feel. The political situation seems to be deteriorating at the moment with dire political projections for the country. Permian WTI crude prices are trading at deep price discounts versus the US Gulf as oil production is growing much faster than pipeline construction. This is likely to hold back oil flows to market. 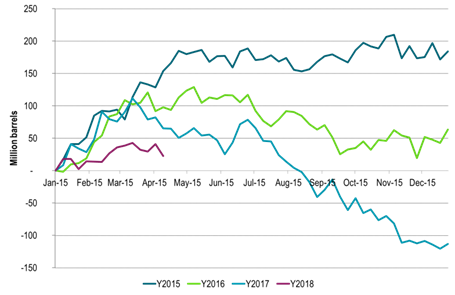 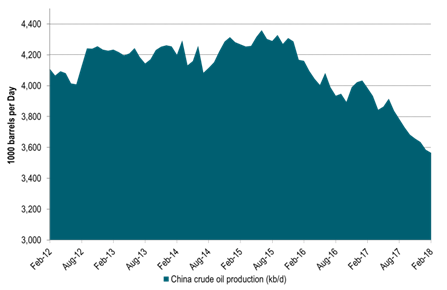 Ch3: Crude production in Venezuela drops like a rock 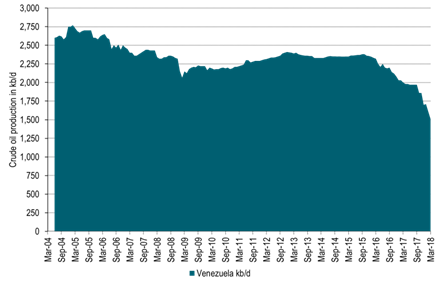 Ch4: US oil rig count keeps rising along with prices 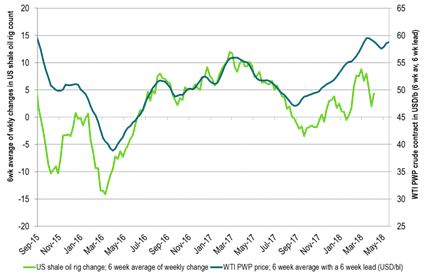 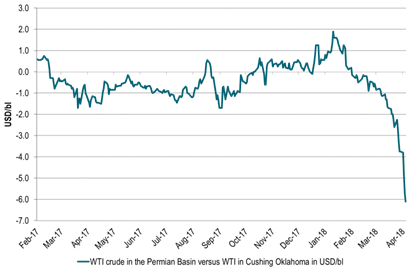