China today launched its long awaited yuan denominated oil contract at the International Energy Exchange (INE) in Shanghai. Seven crude streams from UAE, Qatar, Oman, Yemen Iraq and China will define the pricing of the contract. There is substantial scepticism towards the contract. Most of the sceptical arguments will in our view dissipate over time as rules, regulations and capital controls are adapted and adjusted as time goes by. The Chinese government likely has plenty of leverage to make the contract a success making it into an Asian oil benchmark representing a vibrant and growing oil demand which today accounts for 27% of global demand.

The launch of the contract will open up for international participation in China’s commodity market for the first time. International oil players will need to hold renminbi books reflecting an oil market which here onwards will roll on two currency wheels.

The rapidly rising risk that Donald, Mike and John will tear up the current Iranian nuclear deal in mid-May makes it likely that Iran will accept crude oil settlement in renminbi in not too long in order to avert the risk of renewed dollar sanctions which it experienced so painfully from 2012 to 2015.

The front month Brent crude oil contract jumped 2.2% on Friday to $70.45/bl on news that John Bolton was replacing Lt. Gen. H:R: McMaster as the US national security advisor. John Bolton is known to be abrasive, undiplomatic, deeply conservative and nationalistic with hawkish views on Iran and North Korea. As such he matches both Donald Trump and his new secretary of state Mike Pompeo. It is now difficult to see how the Iran Nuclear deal can survive beyond mid-May when a new round of US waivers is needed to carry the deal forward yet another quarter, unless of course the deal is significantly re-worked. Apparently however the non-US signatories to the Iran nuclear deal are still in the dark with respect to what and how Donald Trump want’s the deal to be re-written. The May waiver deadline is approaching rapidly and as far as we know there is no real work in progress in order to re-work the deal. The appointment of John Bolton also increases the risk for sanctions towards Venezuela. Venezuela’s oil production and export is already in free fall but hanging on a thread by US refineries who are supplying Venezuela with naphtha in exchange of heavy crude oil. Venezuela would not be able to export much oil without the naphtha or light crude which is critical for diluting its heavy crude to a quality which is exportable. Thus US oil sanctions towards Venezuela would cut the last thread.

After years and years of waiting the Chinese Yuan denominated oil contract quoted at the Shanghai International Energy Exchange (INE) is finally here. China did try to launch an oil futures contract back in 1993 but it basically blew up due to uncontrollable price volatility. This time around China has taken good time to prepare the launch of its new oil contract in order to make sure that there is no second round flop like in 1993. China last year became the world’s top oil importer with an average import of 8.4 m bl/d. At the same time it is also the world’s sixth biggest oil producer with an average production last year of 3.8 m bl/d.

Seven deliverable crude streams in Shanghai will be used to settle the INE crude oil contract. They originate from UAE, Oman, Qatar, Yemen and China itself. The crude streams are distinctly different from the light, sweet crude benchmarks of Brent crude and WTI. The INE crude streams are on average (across the different grades) required to have an API gravity of more than 29.6 and a sulphur content of less than 2%. In comparison the WTI benchmark is very light with an API of 39.6 and only about 0.24% sulphur. As such the INE benchmark is distinctly different from both Brent crude and WTI. It is however very close to the Dubai crude oil marker which has an API of 31 and a sulphur content of 2%. As such one could say that the INE contract is the Dubai marker in Asia quoted in renminbi.

The new Chinese oil contract will likely over time come to represent Asian oil demand in general. In 2018 Asian demand is set to average 27 m bl/d (IEA) or 27% of global consumption. It has been argued that the new benchmark will be a bad price hedge for oil deliveries in other places in Asia than Shanghai. This is based on the assumption that the oil price fundamentally is set either in the US (WTI), in the Gulf (Dubai marker) or in Europe (Brent). And as such it should mathematically be better to hedge with one of these three price points rather than the new Chinese INE contract. However, if the driver of the global oil market and thus oil price dynamics is instead really set by the vibrant oil demand in Asia rather than the three mentioned oil price benchmarks then it would clearly be better to hedge with the INE contract.

In our view the new INE contract is not an effort to replace the existing global crude oil benchmarks. It is instead filling a needed vacuum in the global oil market: A marker for the Asian market. It has been argued that the existing crude benchmarks are successful since they are located at hubs with both large production and consumption. But this is also actually true for the new benchmark with China being the sixth largest oil producer in the world as well as the biggest oil importer in the world.

To start with the INE contract seems to have several disadvantages. It will have limited trading hours with the last trading slot ending at 0700 am GMT and thus just before the London market opens. The Chinese government has also set crude oil storage costs at twice the global average level in order to avoid excessive price volatility due from potential games between the physical market and the new INE contract. Such high storage costs will be negative for the necessary interplay and price discovery between the local physical market (derived from storage economics) and the INE financial instruments. Another reason for the very high storage cost may be to avoid commodity storage games used for shadow financing and circumvention of capital controls which has flourished for other commodities traded in China. The quotation of the INE contract in renminbi will also be a negative as seen by most current oil market participants in the current dollar dominated oil market. And lastly Chinese capital controls and unpredictable regulations will also be a concern for many potential participants.

Many of these negatives will however dissipate over time. Trading hours will expand, storage costs will normalize, general capital controls will ease and rules and regulations will stabilize. And lastly the renminbi will be more and more accepted currency world-wide. The Chinese government does have time to adjust and the current mode of the INE market is launch phase with some trail and error. The front month INE contract is actually the September 2018 contract allowing plenty of time for adjustment. So we do not think that one should judge the contract in the early phase on the many negative traits which have been highlighted.

More than 6,000 trading accounts have been opened for the INE contract including China’s largest oil companies and 150 brokerage firms. Larger foreign financial institutions like J.P.Morgan have also opened accounts. To further attract foreign participants the Chinese Government has waived income taxes for foreign investors for the first three years. An addition attraction of the INE oil contract is that it will be the first time foreigners will be able to trade commodities in China.

The Chinese government has a lot of power in order to ensure that the INE contract becomes a success with widespread use. The easy way is of course to demand that all domestic crude oil purchasing is done with settlement versus the INE contract benchmark. In that way any oil producer who would like to sell oil to China would have to accept the INE contract and settlement in renminbi. China could of course also lean on the countries who cooperate with China on the Belt and Road Initiative (BRI) with six major infrastructure projects in overdrive this year. Asking the involved countries in these BRI projects to use or support the new INE oil contract could be a natural request.

We think that the launch of the INE contract in China is a natural development reflecting that China is the world’s top oil importer, the sixth largest oil producer and a natural benchmark for oil prices in Asia. However, essentially what it all boils down to is that China wants to be able to purchase its oil in renminbi. There are several countries already on-board: Russia, Venezuela, Nigeria and Angola are all already selling oil to China in renminbi. We assume that UAE, Oman, Qatar, Yemen and Iraq also are accepting renminbi as payment for crude delivered to China since six of the seven crude streams in the INE contract originates from them.

It is surprising to see that there are no crude oil streams from Iran in the new INE contract. The Iran Heavy crude stream with API = 30.2 and Sulphur = 1.8% should be a natural match the INE crude slate profile.

Iran is one of the countries which have been heavily hit by the weaponized USD. In 2012 the US applied pressure through the SWIFT system. It blocked clearing for every Iranian bank, froze $100 billion of Iranian assets which together with other measures helped to block Iranian oil exports which roughly dropped 1 m bl/d due to this.

Now pressure is rising rapidly towards Iran. In the US forces are gathering to tear apart the Iran nuclear deal with the recent appointment of Mike Pompeo as US secretary of state and John Bolton as the US national security advisor. Donald Trump together with these two now looks ready to tear apart the current Iran nuclear deal as waivers are up for renewal in mid-May. The Saudi crown prince Mohammed bin Salman also seemed to apply pressure against Iran at his meeting with Donald Trump. Thus Saudi Arabia seems like it is sticking with the US while Iran, Iraq, Oman, UAE, Qatar and Yemen are drifting over towards China. China and the US are at the same time drifting apart amid increasing trade tensions with political tensions in the South China Sea being the icing on the cake so to speak. It seems highly plausible in our view that Iran in not too long with explicitly state that they also accept payment in renminbi for oil sales to China.

Saudi Arabia however seems for the time being to stick even tighter to the dollar-oil deal which the House of Saud presumably struck with Nixon and Kissinger back in 1974 in exchange for protection and geopolitical support.

Crude slates in the INE contract 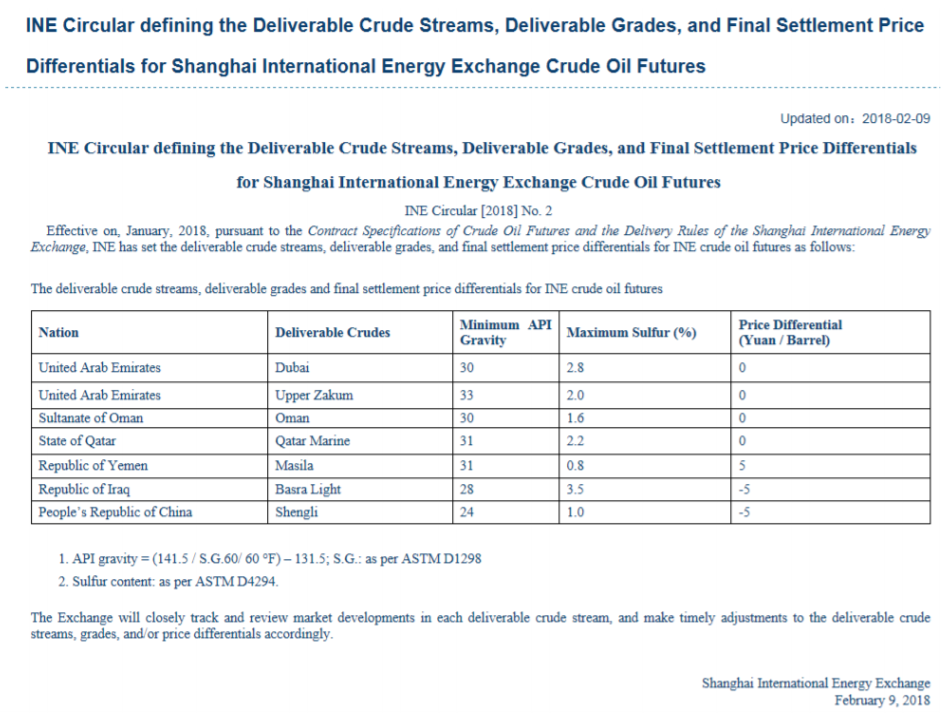 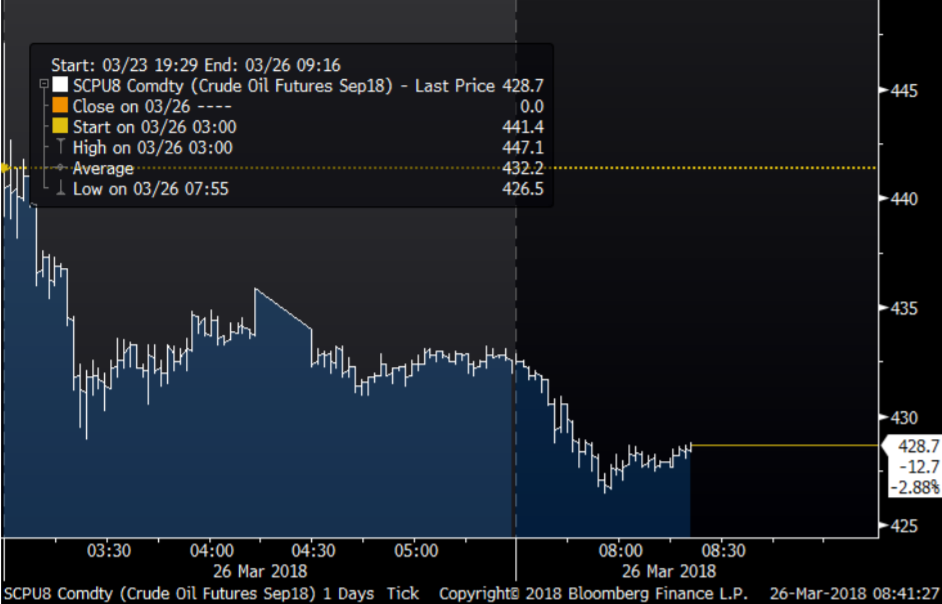 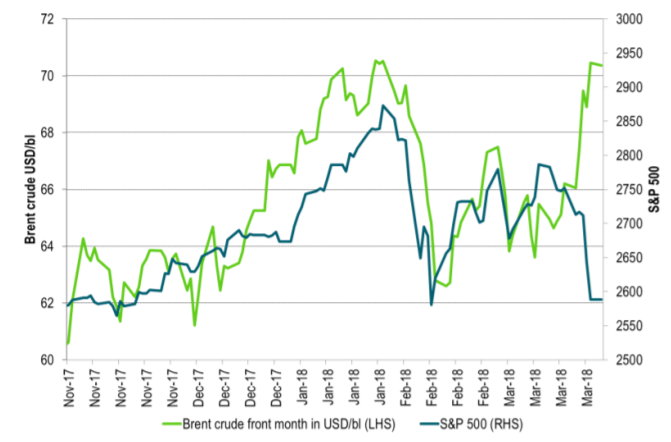 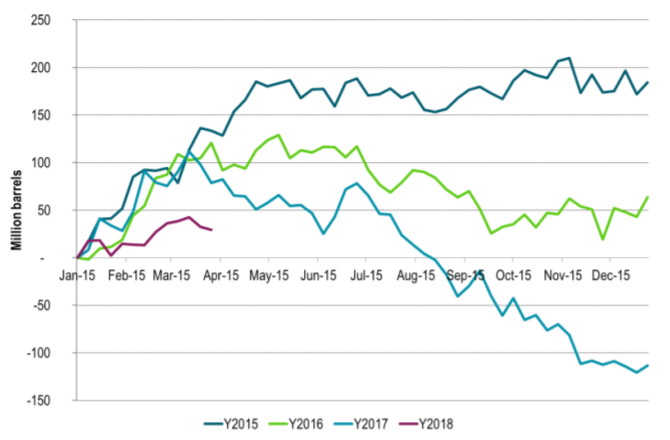 Oil hurt by trade war concerns but fundamentals are bullish