Hefty falls of 3-6% on the week and around 20% across the board for the year. Twelve months ago we were heralding continued recovery which indeed lasted through to mid-year. Just gold, silver and oil are higher than December 2010, but their trajectories are down. Not all is lost. Major Japanese trader Marubeni see an Aluminium supply deficit of 357,000t in 2013. That’s a tad precise and would hardly dent the 4.8Mt LME stockpile, but it is a start. They look for the price to start rising up towards $2800/t, compared with today’s $2000. 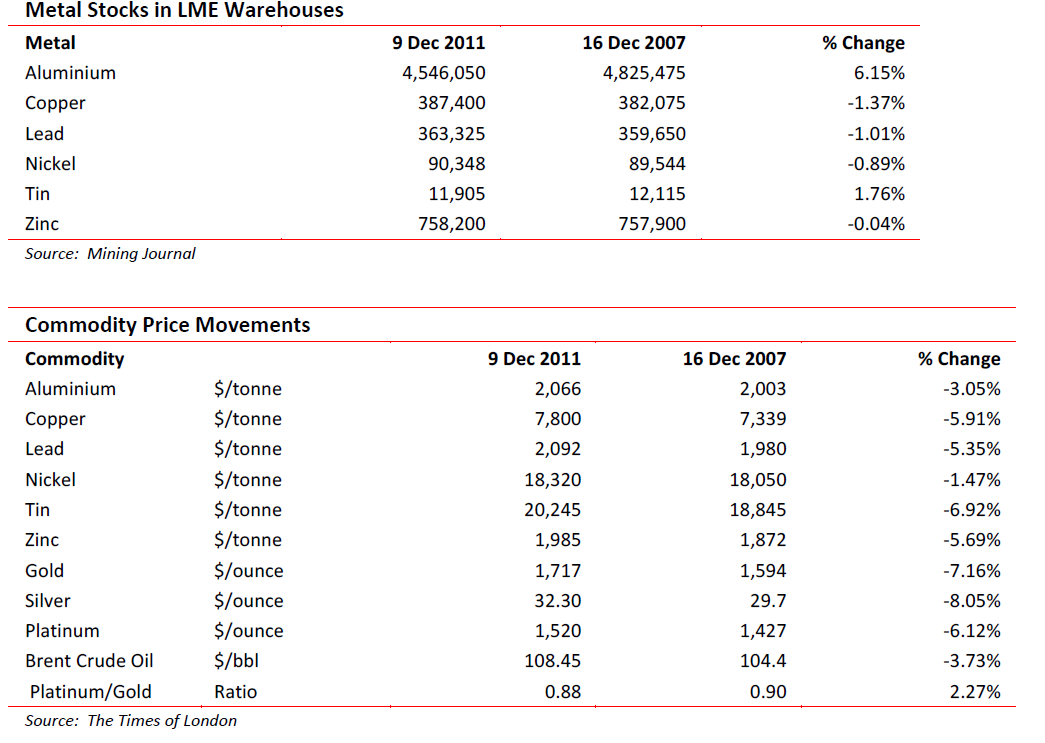 There are no strong markets. Spot coal, iron ore, steel industry additives, are all under attack. Now we hear it for potash. Fact is, some bulk minerals are less soggy than others.

Potash. The favourite fertilizer mineral (usage 55-60 Mtpy) differs from all others in the agricultural sector. Whereas you can switch from coffee to tea to cocoa, from barley to wheat and from apples to oranges, you have little choice about what makes them all grow. Added to its attractions as an essential ore, its relatively limited occurrences and its demand profile (an increasing population base seeking better nutritional standards), this does not present it behaving like any other commodity in an economic downturn. Plants will still grow if you miss a season’s dressing. Thus the price for standard grade potash, c. $500-600 per tonne, rose to $900 in 2008 only to fall to $300-350 as the last recession set in. Now it has slipped to c. $460, inventories are building up at the Canadian mines and short time working is in force. This may persist until nearer the March-April growing season. The longer term outlook promises a return to tight conditions in later 2012 and a strong run until new production comes on stream (UK, Brazil, Ethiopia) in 5 years time.

The underlying threat is that of an economic slowdown in China.

Not so Precious Eh? So what happened to the flight into Egypt? Sorry, to true stores of value? Gold for the affluent purists, silver for the wannabees and platinum for the cognoscenti? We devoted last week’s leader to warning that the bull run is – for the time being at least – running out of steam. There was a loud hiss of exhaust gases this week, so let’s perspectivise:

Views and forecasts abound. We had a chartist/technical analyst, Dr. Nu Yu, calling gold down to $1600 and lower. He is right so far. Then the not-shy Rob McEwan is going for $5000 – on this run we are with Nu Yu but don’t see $1000 being tested or the downside.

Another late entrant in the hedge betting stakes is Mr Murenbeeld of Dundee Wealth, he says there will be an upward explosion in the gold price (explosions do tend to go up) “at some point in time, but just when is difficult to judge”. Spot on.

Meanwhile his stable mate Frank Holmes of US Global Investors thinks $10,000/oz gold not unattainable. Slowly, painfully they are getting to our mark of $40,000 which is where all the gold would equal all the dollars and we would all live happily ever after.

Platinum deserves more attention because it is a real metal, like being used in industry as well as having decorative properties and a handle on non-destructibility. Then since over 70% of it comes from a tight corner of South Africa it doubly grabs the analyst’s attention. Output has fallen heavily in Rustenburg this year. They speak of 27% – 36%. The reasons? The Safety Inspectorate has caught up on the untenable accident rates and ordered increasingly frequent stoppages. Combined with overgenerous wage increases and allowances and a falling metal price, these are not happy days. Share prices speak loud.