At commodities investment and mining conferences, in bank and broker reports, in coffee shops and airports, people repeat the same bromide: Ever increasing populations and rising global incomes and wealth inexorably means that in the long run commodities prices must rise.

Unfortunately for investors seeking simple routes to riches, this pater noster falls readily in the face of both historical, empirical evidence and economic theory. Real, inflation-adjusted commodity prices have been cut in half since around 1850, even as populations rose seven-fold, global GDP expanded 85 times, and consumption of most commodities increased exponentially.

So, the world’s population has risen sevenfold since 1850 while the global economy today is 85 times larger than it was then, and commodities prices are half of what they used to be, adjusted for inflation. The empirical evidence suggests that just because the world’s population and wealth appear likely to expand in the future, it does not mean at all that commodities prices must rise as well.

Economic theory backs the historical record. Theoretically industrialization should lead to even greater increases in the output of most commodities, at lower prices, with increased discovery and recovery rates, and lower discovery and development costs, for metals and energy resources due to technological advances. This is exactly what has happened. The world’s population has exploded and overall wealth has risen sharply. These increases have led to increased total demand for commodities. Even so, prices have fallen in the long run. Markets do not always respond to the most simple analyses, a point producers, investors, and others should heed. 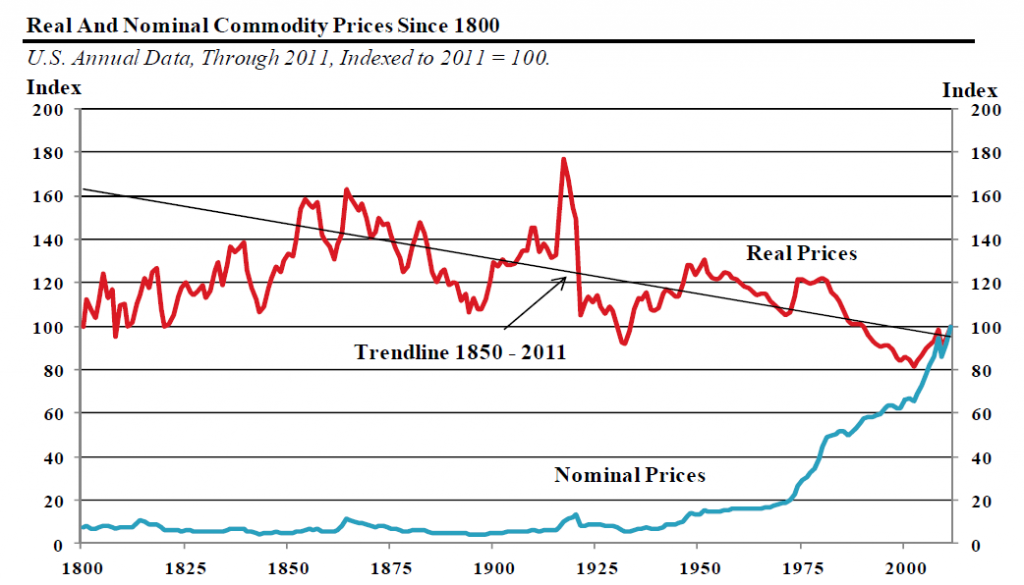 Related Topics:commoditiescpm group
Up Next

Is gold good or not?