Platinum continues to perplex. For so long, platinum had it over gold in both price and demand. Its lynchpin was its use in automobile exhaust catalysts where it transforms all those horrible fumes into nitrogen and water. As GDP rises, so does the demand for autos and so…fait accompli. The price is still strong, relatively, but it lags gold instead of leading it whilst not even the most serious of labour disputes in the metal’s home, Rustenberg, are boosting it. Over 17,000 workers have downed tools in the bitterest of disputes, whose reasons are far from clear. Safety-related stoppages abound and world No 3 producer Zimbabwe is playing silly beggars with the mining companies there. Perhaps instead of asking why the price is not orbiting, we should ponder what might happen when peace returns, which it will.

Central Bank Gold Buying figures are at best tardy and unreliable. Now the Financial Times tells us the People’s Bank of China has been a significant buyer, 227 tonnes, in the last three months of 2011. Maybe. Mine production would have been about 100 tonnes, whilst the WGC says domestic demand was 191 tonnes, so there is a gap of about 136 tonnes.

There is much scepticism about this having gone straight into the vaults to boost the 1054 tonnes officially held there. Even if it did, there is far to go before they approach the c. 9000 tonnes held by Fort Knox. Official figures are due out next month.

Whither the gold price? The Gold Report has interviewed one Greg McCoach whose contribution to forecasting includes his “Insider Alert” service. He says gold is going to $6000/oz dragging silver to $70/oz. Now, he doesn’t say when. He goes on to remind us that just to cover the world’s debts it would need to be $19,500/oz. Maybe he has not factored in that for every debtor there has to be a 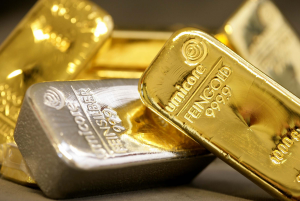 creditor, so world debt nets out to zero. The creditors for the most part are pensioners, hostage to banks, funds, governments, etc., but let’s not go there. No Greg, the true price of gold is at $40,000/oz, that is when we get back to a gold standard and all the paper dollars are divided into all the surface gold. Like you, Greg, we have no idea when that might be. Next he has silver at $400-500/oz against gold at $6000-10,000. Let’s just hear it for a drop of cold water here. Sure, silver is poor person’s gold, but 60% or more of it is used in industry and surface supplies are daunting. At the right price, commercial demand will dry up and all those coins will be melted down.

The world needs fly-away price theorists, if only for amusement value. We do not presently subscribe. India’s 2012-13 Gold imports may fall 35%, says a government panel. They topped $58 bn in 2011 (that’s about 1,000 tonnes), but will dip to $38bn this year. It still hits the current account deficit and with inflation at 5-6%, becomes less attractive. Import duties are now 2% on value of gold and 6% on silver. There is no suggestion of imports being banned.

And silver? Today the gold price is about 50x that of silver and its newly mined production about one fifteenth. India takes in about 1000 tonnes, one-third of all gold mined annually and traditionally about 3000 tonnes of silver. So the ratios are askew. In 2011 the country imported 4800 t and looks to do 5000t this year. Are these sizeable increases a reflection fo the rising gold price? Highly likely, particularly as gold imports are forecast to drop below 900t. So the price ratio could well be persuaded to narrow in favour of silver.