OECD inventories rose 18.6 mb in April marginally up y/y. OPEC has not been able to draw OECD inventories down yet which is a disappointment to the market. Weekly data have shown a substantial draw since mid-March. Some of that draw has been in floating storage and have thus not shown up in the OECD inventories yet.

The IEA estimated that the need for OPEC’s oil was 32.1 mb/d in H1-17. This is more or less exactly what Bloomberg statistics tells us that OPEC produced on average year to May 2017. Thus no inventory draws or gains of any magnitude in H1-17.

For the second half of 2017 the IEA calculates that the market will need 33.4 mb/d of oil from OPEC, a full 1.3 mb/d higher than in H1-17 due to seasonal demand effects and refining maintenance seasonality. Maintenance of refineries has been unusually high so far this year. But these are now coming back in operation.

Except for a brief flash sell-off in August 2016, the 18 mth forward WTI price has not touched down to $47/b since April 2016. It was when this forward contract broke enduringly above $47/b for more than 6 weeks last spring that the US oil rig count started to rise and has been rising continuously since then.

While the IEA implicitly predicts a substantial inventory draw in H2-17 they see a different picture for 2018 where they estimate that the need for OPEC’s oil is no more than 32.6 mb/d. OPEC now produces 32.2 mb/d while it holds back 1.2 mb/d and thus has a natural production of 33.4 mb/d. Thus OPEC will need to hold back at least 0.8 mb/d all through 2018 in order to prevent inventories from rising again. And if Iraq’s production capacity rises to 5 mb/d by the end of 2017 versus current production of 4.45 mb/d or if Libya’s and Nigeria’s production revives even further then OPEC will have to hold back more.

The IEA basically says that inventories will draw substantially in H2-17 due to OPEC cuts. Then however in 2018 OPEC will have to maintain more or less the same size of cuts just in order to prevent inventories from rising again.

The level of the WTI 18 mth contract which now currently trades at $47.5/b is however the big question. Will it shift higher as well? Usually the whole forward curve shifts higher when inventories draw down and the spot market firms up.

However, IEA is prediction that OPEC needs to cut production all through 2018 as well in order to prevent growing OECD inventories. Thus for every additional shale oil rig being activated through the next 6-12 months means that OPEC will have to hold back even more of its production in 2018.

Every additional rig in the US over the next 12 mths is increasing the production-cut burden for OPEC in 2018. It is also increasing the need for the market to believe that OPEC will cut production all through 2018.

The market fear is that the production-cut burden will in the end become too large for OPEC and that it will drop the ball in 2018. Not prolonging the cuts beyond March 2018 and instead opt for volume over price again just as it did in 2014. That is an open question which is itching in the back head of the market.

Ch1: Deeper contango for crude curves
But front end likely to firm in H2-17 as inventories draw down 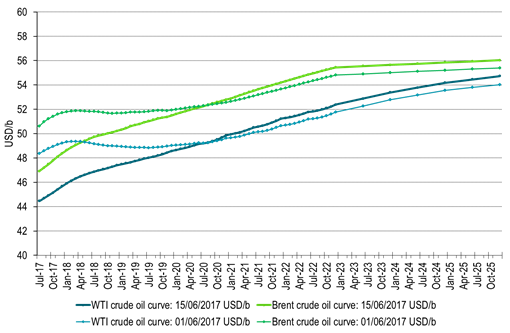 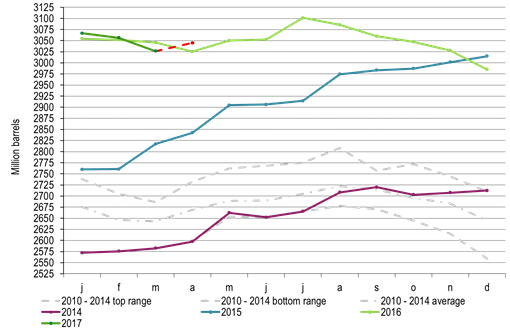 Ch3: Iraq crude production
It says that its production capacity will reach 5 mb/d end of 2017 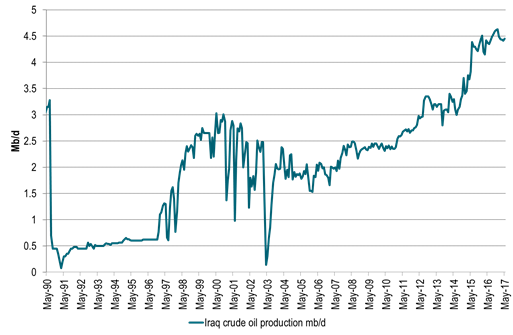 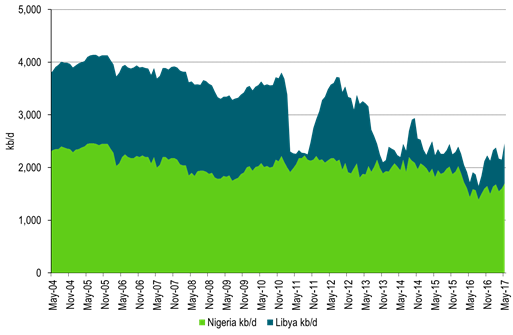 Ch5: WTI 18 mth forward crude price heads for the US shale oil “price floor” (or rig versus price inflection point) from one year ago.
Is the inflection point still there or is it higher or lower?
The market is asking US shale oil players to stop adding more rigs.
How low will the price need to move in order to make them listen? 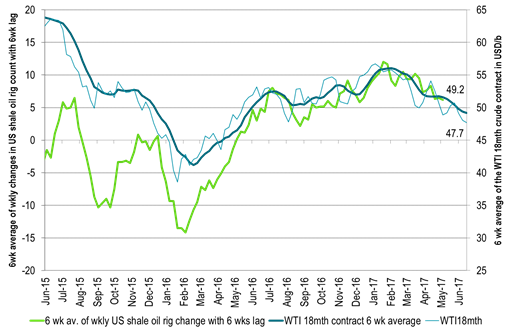 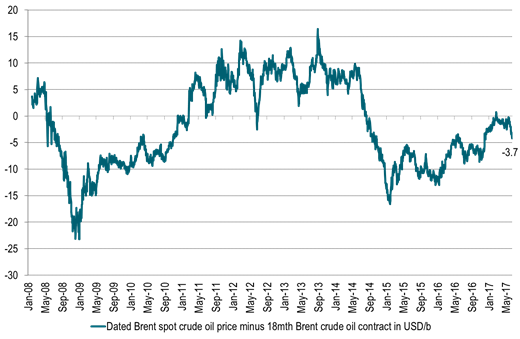