Crude oil comment – Increasing product stocks and OPEC members fighting for market share
While the Brent crude oil summer price rally went almost to $70/b (Brent crude) the recent rally did not go higher than $54/b before being sold back down to $48/b. We have been running a crude oil surplus for all of 2014 and so far in 2015. Strong product demand has helped to keep oil product stocks in check with healthy refinery margins as a result. This has helped to secure solid crude oil purchasing by refineries. The crude oil surplus is now increasingly being transferred to a surplus also in oil products. This leads to reduced refinery margins and less aggressive buying by refineries. Having a surplus in both crude and products makes the surplus oil situation more widespread. Gravity increases and it becomes harder for oil to jump. While a return of refineries after maintenance will give some revival in crude oil demand it may not be a blessing for oil product inventories. Especially not for middle distillate stocks which in Europe are at a very high level.

OPEC members are increasingly seen undercutting each other on price both towards Asia and the US in order to secure physical sales. Usually there is some kind of common front among the OPEC members in terms of setting their individual Official Selling Prices (OSP’s). Not so at the moment. OPEC’s price fight for market share has led to increasing OPEC oil shipments to the US Gulf. While this is partly natural due to falling US crude oil production, it is also happening at the expense of LatAm volumes normally lading in the US Gulf. These volumes thus have to find other buyers or they need to cut their prices as well. Iran is likely to join in with increasing export volumes from Q1-16 onwards. Thus price fighting is likely to intensify further. After an all-time high of 10.6 mb/d in July we have seen Saudi Arabia’s oil production decline to 10.3 mb/d in September. While this is coinciding with seasonally declining oil consumption domestically we also see that Saudi Arabia’s crude oil stocks rose by 7 mb in August and 41 mb y/y. So reduced Saudi Arabian oil production may be a consequence of very high Saudi crude oil stocks in combination with a fairly saturated crude oil market. 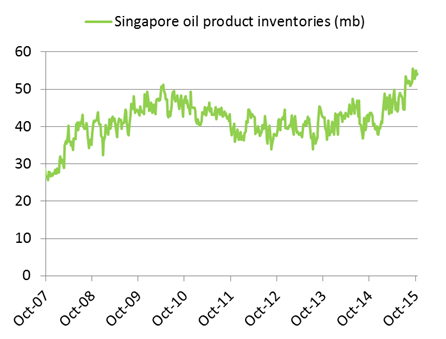 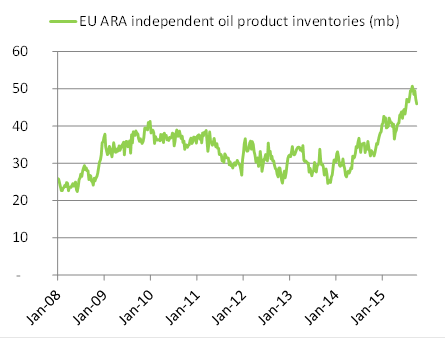 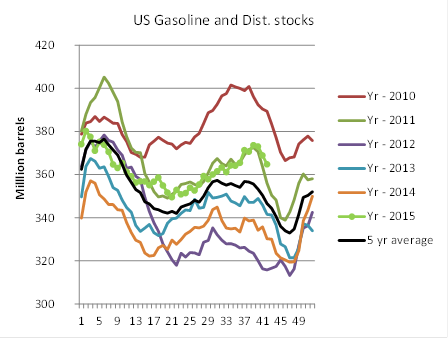 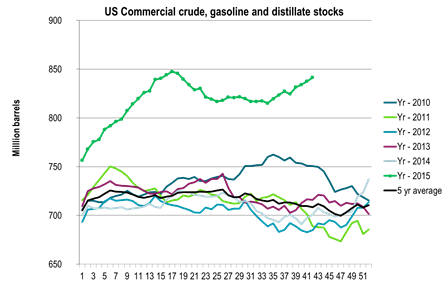