Oil prices experienced a long overdue price correction last week as Brent crude fell back 2.8% to $68.58/bl along with a broad based sell-off in equities. Bearish oil stats showing US crude production rose above 10 m bl/d in November and a fraction from all time high was clearly bearish news though the market did not seem to care too much about it when it was released. US oil players adding 6 rigs last week and 18 ytd probably created bearish concern at the end of the week along with the accelerating sell-off. We expect the US EIA to revise its forecasted US crude oil production significantly higher in tomorrow’s STEO report. That will be the 5th revision in five months and it is probably not done with upwards revisions until it reaches an average 2018 production forecast of 10.7 m bl/d. A combination of the latest STEO and DPR reports indicates that US crude oil production is standing at 10.41 m bl/d now in February.

Last week’s data point came as little surprise to us. This is because when you look at the monthly US EIA STEO report and the monthly US EIA DPR report it is evident that the two reports are out of sync. It shows that the strong rise in US shale oil production which is spelled out very clearly in the DPR report is not reflected in the US STEO report. Neither when it comes to the latest months back to November nor the forward looking months over the coming year.

Last week’s upwards revision of 170 k bl/d to 10.038 k bl/d may seem fickle in the big scheme of things. But when you see that reason is the lack of synchronization between the STEO and the DPR reports then the error becomes systematic rather than just noise. Then one can take into account US shale oil production growth also for December, January and February. The DPR report spells out clearly that shale grew and will grow by 311 k bl/d during those three months. In addition is 60 k bl/d of production growth in GoM and Alaska. Thus a total gain of 371 k bl/d on top of the November data.

Unless oil prices collapses there is little reason to believe that US shale oil production will not continue to grow by 100 k bl/d per month all through 2018 (as it has done since July 2017) rather than the 41 k bl/d/month estimated in the January EIA STEO report. We expect another solid revision higher for 2018 US crude oil production projection by the US EIA when it publishes its monthly STEO report tomorrow. It will be the 5th upwards revision in 5mths and it won’t be the last until they reach a forecast of around 10.7 to 10.8 m bl/d for 2018. 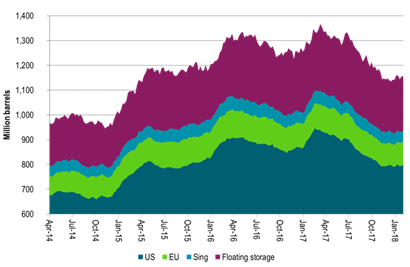 Chart 2: Dated Brent crude has shifted to a discount to Brent 1mth rather than a premium 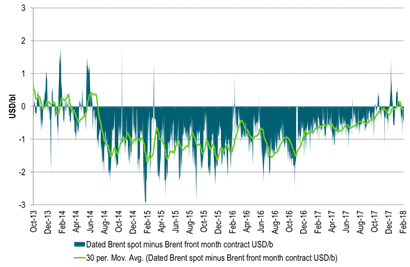 Chart 3: Net long speculative allocation to oil at all-time-high
That’s a painful position as the market now sells off 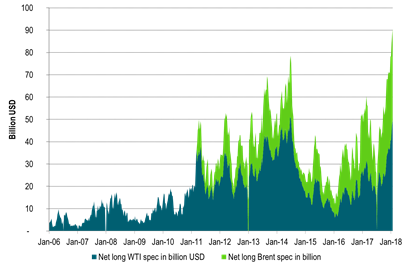