Russia and Saudi Arabia agreed over the weekend to continue the cooperation of managing supply of crude oil to the market which was initiated in late 2016 in the so called “Declaration of cooperation” between OPEC and 10 cooperating oil producers. No decision of any specific cuts has yet been decided but the message was clear: “We’ll monitor the market situation and react to it quickly”.

While they may disagree on what is the right price to aim for they are all in agreement that they do not want global oil inventories to rising back up again.

Specific strategy and cuts will be communicated later this week when OPEC meets in Vienna on 6 December.

The key take away from all of this is that global oil inventories will not rise back up, the Brent crude oil price curve will not bend deeper and deeper into contango and the front month Brent crude oil will not dive yet lower to USD 55, 50, 45,…/bl.

Exactly in what price range above USD 60/bl we’ll end up depends on the final decision, strategy and communication from OPEC+ at the end of this week.

Canada, Alberta’s Premier Rachel Notley decided this weekend to cut Alberta’s oil production by 325 k bl/d from January onwards until local inventories are back down to normal. Alberta is the largest oil producer in Canada and the cut constitutes a reduction of 8.7% in Alberta. After that the production cuts will be reduced to 95 k bl/d until the end of 2019. Together with the agreement between Russia and Saudi Arabia this weekend this adds to the forward fundamental price support picture.

A contracting call-on-OPEC is of course unsustainable over time. As such the estimated decline in call-on-OPEC in 2019 is fundamentally problematic. Internal dynamics within OPEC will however decide how problematic this is. For 2019 we expect production in Venezuela to decline further from an average of 1.4 m bl/d this year to only 1.0 m bl/d in 2019. In addition we expect Iran’s production to be roughly 0.4 m bl/d lower on average in 2019 than in 2018. So here already we have internal OPEC declines of some 0.8 m bl/d y/y to 2019 which reduces the needs for cuts by the other members. So with help also from Russia and the other 9 cooperating countries the magnitude of needed active cuts by those who have to cut will not amount to all that much. The amount of needed cuts by the active cutters within OPEC+ can of course change rapidly due to very unpredictable production in Libya, Nigeria and Angola just to mention a few.

Russia has been very reluctant to join in on further cuts and has stoically announced that it is fine with almost any oil price next year. In our view Russia seems to be concerned over the very strong US crude oil production growth. As such its position as we read it is twofold: 1) It does not want to see global inventories rising back up again and 2) It wants an oil price at a level which tempers US shale oil production growth. The challenge for Russia thus seems to be how to cut production without driving up the oil price too much.

The Brent crude oil price has rebounded close to 4% this morning to USD 61.7/bl but seems to have halted there waiting for the details and specifics to materialize. The Joint Ministerial Monitoring Committee which works on behalf of OPEC+ will meet in Vienna on 5 December and discuss needed action. Its recommendation will be the foundation for the OPEC ministerial meeting and the full meeting of OPEC+ the following day. 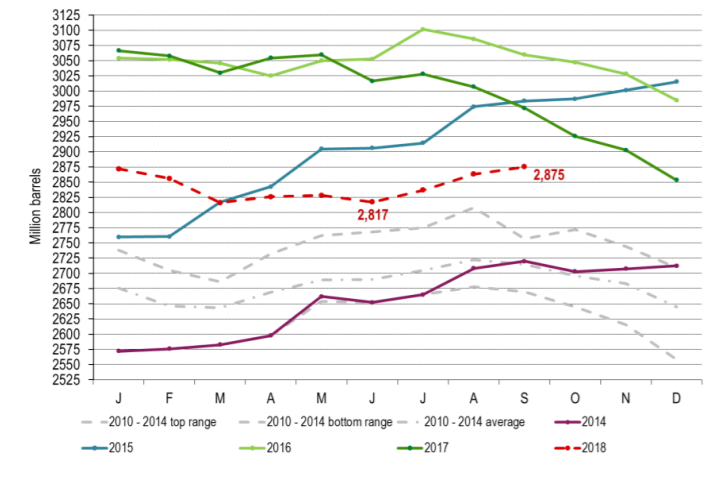 Ch2: Net long speculative positions in million barrels for Brent + WTI down to the previous lows since start of 2016 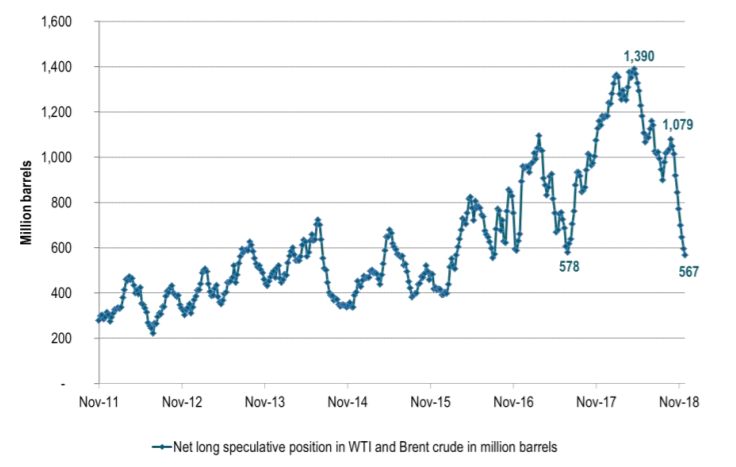 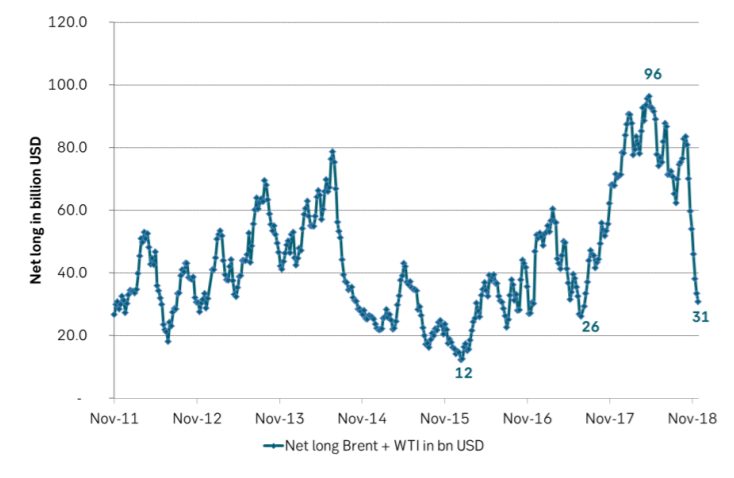 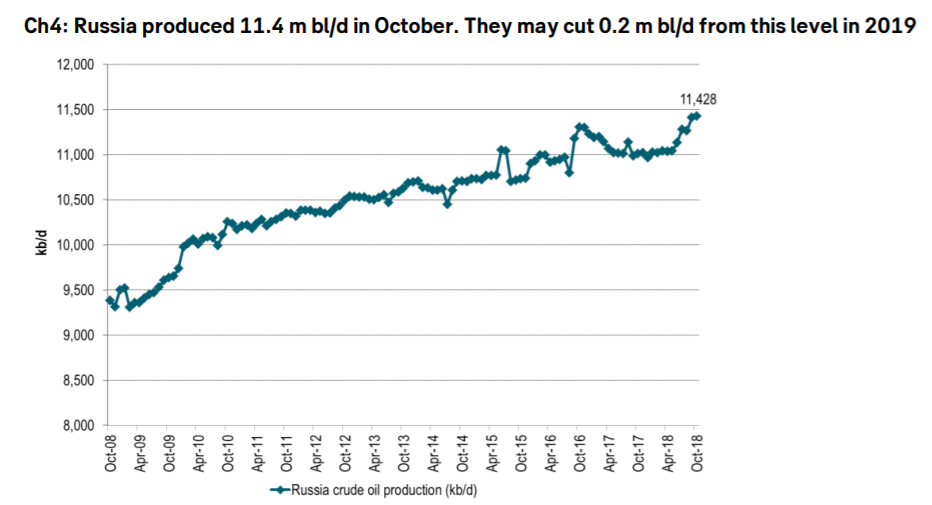 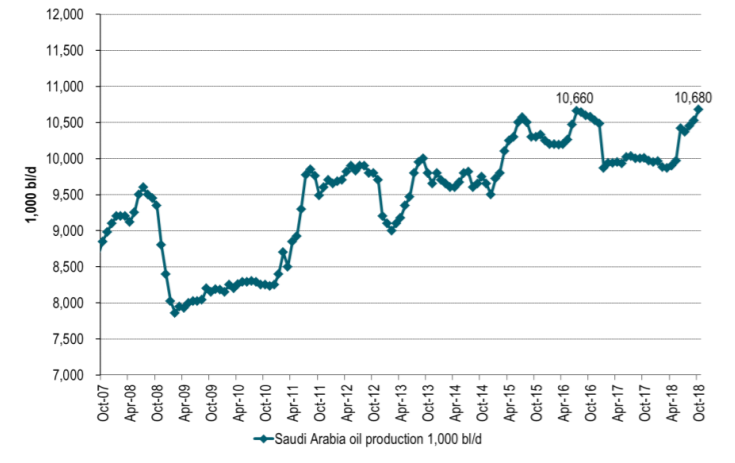 Ch6: Production losses from selected countries have led to losses of more than 2 m bl/d since early 2017. We expect further losses also in 2019. How much will of course strongly impact the supply/demand balance in the oil market and thus the need for active production cuts by OPEC+ or those who can cut in OPEC+. As Aleksander Novak said: ”we don’t know yet if there will be a surplus in 2019 or not”. Putin’s statement this weekend “…we will monitor the market and react to it quickly” is thus a natural continuation of this. 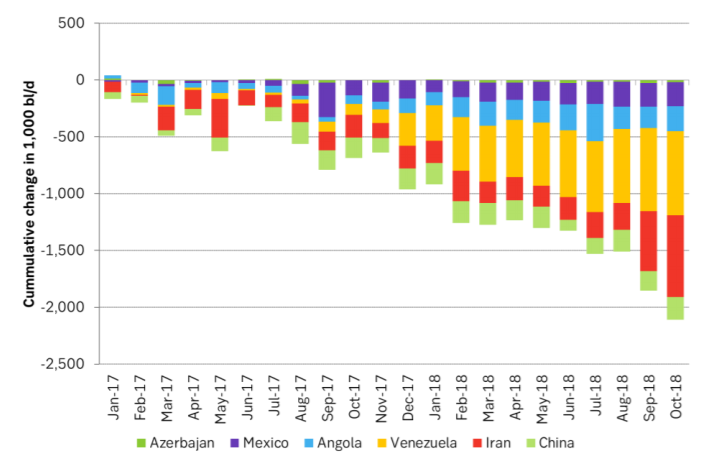 Oil price bottoming in Q1-19 seems like a fair bet