We see low risk of a coordinated action at the June OPEC meeting on Thursday and reiterate our view that there is zero chance of an OPEC cut this year. With few event risks on the radar, we think the next big price turn will come from structural changes. The rebalancing is underway but the latest tightening comes from transient outages. Ultimately, the rebalancing depends on the ongoing contraction in US shale but the current price rebound is throwing a lifeline to most shale fields. Saudi Arabia will face two choices: earn a higher oil price and leave additional barrels to North Dakota’s cowboys, or tap some of its spare capacity. Neither choice is price bullish.

April’s extraordinary OPEC meeting in Doha, including a few non-OPEC nations, failed to produce an agreement on freezing output as the Saudis linked any decision to freeze to Iran.

It has become increasingly clear that deputy crown prince, Mohammed bin Salman, MBS, who has emerged as Saudi Arabia’s leading economic force, was the architect behind Saudis u-turn in Doha. In our view, this was confirmed by the shuffle of the Kingdom’s oil minister, replacing Ali al-Naimi after two decades with al-Falih, who is the chairman of Aramco and viewed as more friendly to the royal family. If this were a game of chess, we would view this as a rokade. Getting so many producers in the same room was an impressive feat for the always aspiring Qatar foreign policy efforts, but it is unlikely to happen again. Most producers feel that they do not have the ability to do much more than they have been doing, and while there may be some feeling of solidarity in the mutual pain of low prices, the savvy players recognise the danger of taking real action. Higher prices will slow the US production fall, extending the time it takes for the market to balance, and pushing the volume share away from this group and towards two non-participants, Iran and the US. 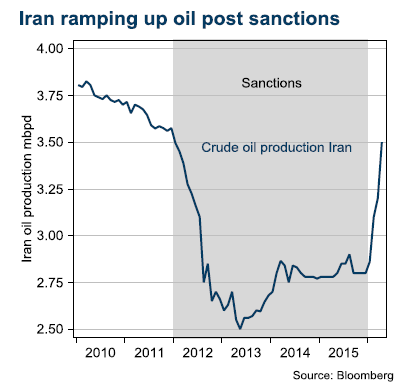 Aramco is not raising billions to plant trees

We base our strong opinion of zero chance for an OPEC cut on one simple fact: this is a massive market share grab. For OPEC, higher prices will be offset by lower volumes, as they simultaneously incentivise US shale growth. As some OPEC and non-OPEC nations involuntarily cut production in the wake of low prices, the Saudis will increase theirs. There is no reason that they would let this production fall off without replacing it. 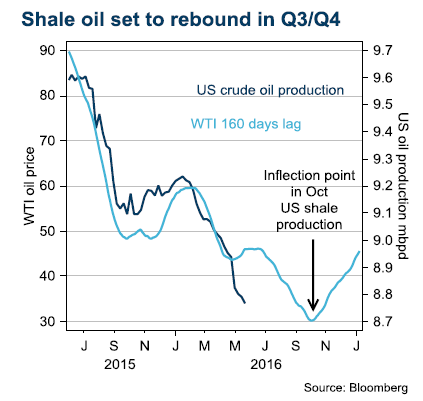 Iran not ready to freeze in Vienna

Neither Saudi Arabia nor Iran is prepared to shift their negotiating position. Iran is fighting for its export market and the Saudis are set to reach peak oil demand over the summer. With little chance of action on Thursday, we think oil will hover around USD 45-50/bbl until shale operators or the Saudis increase production in late Q3 or Q4.