Yesterday’s US EIA Drilling Productivity Report (DPR) showed that US crude oil production is now growing at a marginal rate of 1.3 mb/d/yr and as strongly as it did in 2014. If we adjust for increased well productivity then completions of wells in December stood 27% above the 2014 average. We estimate that volume drilling productivity rose 23% from 4Q16 to 4Q17. Drilling is still running well ahead of completions and we estimate that the number of rigs could decline by 200 rigs without hurting the current marginal production growth. Unless there is a significant set-back in global oil markets or sentiment or in the US shale space with a drop in completions per month we should see US crude production averaging close to 10.7 mb/d in 2018 thus growing 1.38 mb/d y/y average 2017 to average 2018. In addition comes US NGL’s growth of 0.5 mb/d y/y which will bring total US liquids growth to 1.88 mb/d for average 2017 to average 2018.

Yesterday’s US DPR report showed that shale oil production is growing as strongly now as it did in 2014 when it grew at a monthly rate of 114 k bl/d/mth (1.4 mb/d rate).

The EIA estimates that US shale oil production will grow by 110 k bl/d from Jan to Feb which is a marginal rate of 1.3 mb/d. This is in stark contrast to EIA’s latest monthly oil report which predicted crude oil production from US lower 48 states (ex Gulf of Mexico) would only grow at a rate of 33 k bl/d in 1Q18 and on average only 42 k bl/d through 2018.

US shale oil volume productivity growth (new oil per rig in operation) is in our calculations up 23% y/y 4Q17 to 4Q16. This is in strong contrast to EIA’s official productivity measure of zero growth which is not taking account of the huge build-up of DUCs.

Drilling of wells is still running significantly ahead of completions with the inventory of uncompleted wells rising by 156 wells in December. Completions are struggling to catch up. Either drilling will have to fall or completions will have to speed up in order to prevent a further build-up of DUCs. Players should kick out 100 drilling rigs in order to get drilling in line with completions. In order to draw down the DUC inventory they should kick out another 100 rigs more and thus a total 200 rigs while keeping completions at current level. The market should thus not be optimistic on prices due to a decline in US drilling rig count.

Chart 1: US shale oil production to a new all-time-high in February
Growing like it did in 2014. 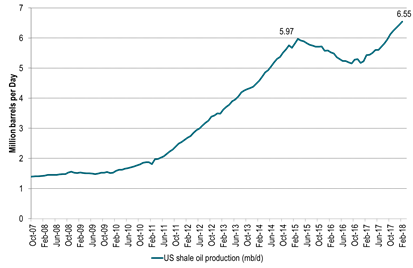 Chart 2: US shale oil production growing as strongly as it did in 2014 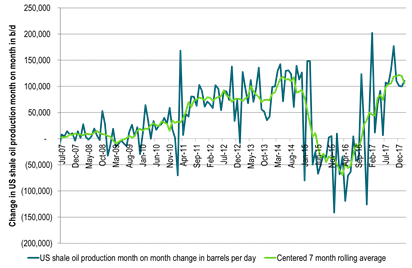 Chart 3: The number of drilled but uncompleted wells is still growing briskly
Thus drilling is running ahead of completions. Completions trying to catch up.
Players should kick out 200 drilling rigs in order to draw down the DUCs 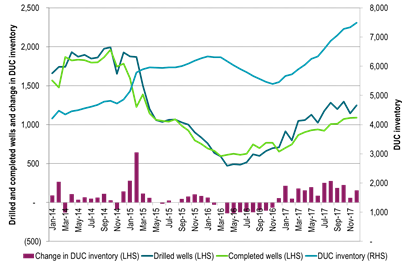 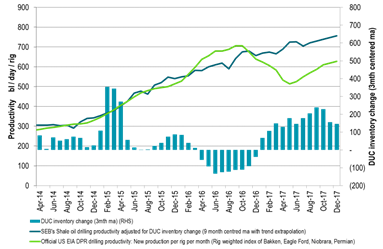 Chart 5: Thus US shale oil volume drilling productivity per rig never really declined y/y
Instead it has stayed at a pretty solid level of around +-20% y/y 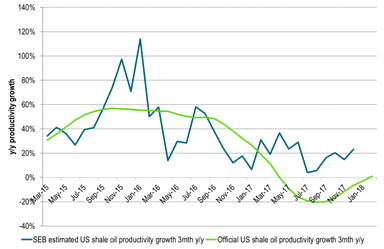 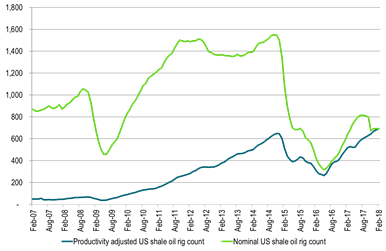