Crude oil comment – Crude oil higher as Hurricanes disrupt crude supply rather than crude demand (refinery processing of crude)
All since the end of July we have seen Brent crude trading fairly range bound between $50/b and $53.64/b. This week it broke upwards out of this trend. Brent crude hit an intraday low of $50.58/b last Wednesday on the fear that Hurricane Harvey would disrupt U.S. Gulf refineries’ consumption of crude oil for a lengthy period of time. I.e. lower refinery activity would give lower crude consumption and thus lower crude prices. When refineries gave signals that damage was not too great and restarts were on the table then Brent crude rose back up and then continued higher.

While the fear last week was for reduced oil processing by refineries due to hurricane Harvey, the coin has now flipped. Now the concern is that this may be a heavy hurricane season with the risk of substantial disruptions to crude oil production in the Gulf of Mexico. The US EIA yesterday reported that US crude oil production last week was down 749 kb/d WoW to 8,781 kb/d which is the lowest since December last year.

Following Harvey we now have Katia, Irma and Jose queuing up with Irma of course getting most attention as it leaves devastation in its trail as it heads for Florida. What we have seen of hurricanes so far this season may of course not be a good predictor for the rest of the hurricane season but it still setts the mind to expect more of the same. I.e. potentially more disruptions of supply.

The take from the sell-off down to $50.58/b last week is that there is little risk to the downside of $50/b at the moment. The Saudi oil put is firmly in place. Cutting exports to 6.6 mb/d in August (lowest since 2011), lifting official selling prices for all grades for October delivery while stating that Saudi Arabia goes full ahead for the Aramco IPO in 2018. They are not dropping the ball anytime soon. In addition we have seen the implied US shale oil rig count declining three weeks in a row now for the first time since May 2016.

The ball is definitely in the court of the bulls at the moment and the price action is looking towards earlier highs this year. However, when we look forward towards 2018 we do have concerns for the global oil market balance.

We expect US crude and NGL production growth to be very strong with lots of drilled but uncompleted wells ready to be completed. The declining drilling rig count right now is thus more a bullish sentiment driver than having a strong fundamental value. Combined with a still high level of commissioning of legacy non-OPEC crude oil production in 2018 we foresee the need for production management by OPEC+ all through 2018.

Thus bullish price moves this autumn towards the higher end of the $50ies/b should be utilized for those who need to hedge the downside price risk for 2018. When the Aramco IPO is done or if OPEC+ falls apart there is definitely downside price risk on the table in 2018. We must not forget that the current market tightness with declining oil inventories is as of now artificially managed by OPEC+. If it had not been for OPEC+ we would have been running a surplus.

This evening we again have the weekly US rig count data at 19.00 CET. We expect to see yet another week of declining US shale oil rig count. Sentiment wise it should help Brent crude to take out highs from earlier in 2017.

Ch1: Hurricane Harvey is taking out supply, not just demand 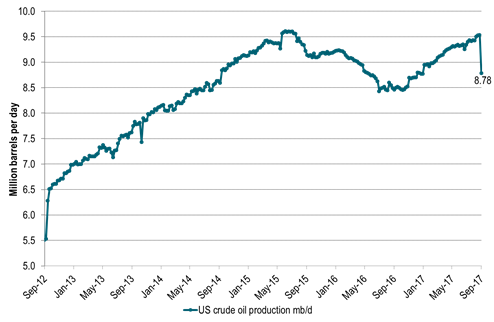 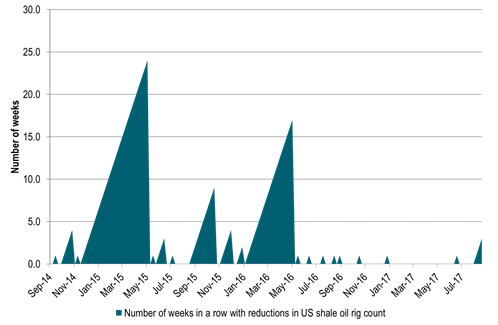 Ch3: Brent crude goal One: $55.33/b
Brent crude November contract price references from earlier in 2017
$55.33/b highlighted as next in line to reach for the Nov Brent contract 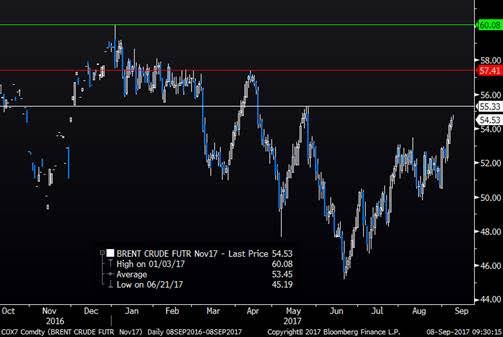 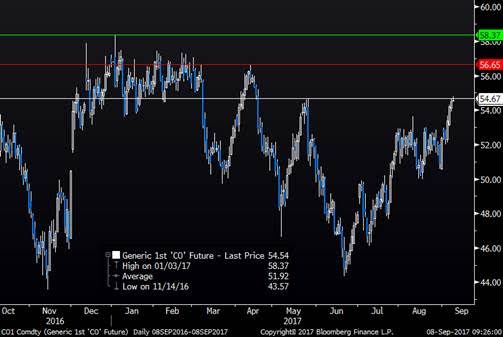 Ch5: Three hurricanes now in action
Is this what we should expect for the rest of the hurricane season?
More dissruptions to come all through the season? 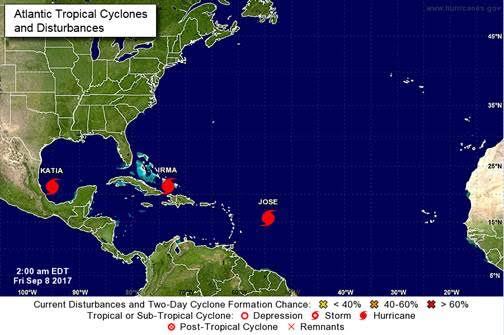 Ch6: With Irma soon to make landfall but with not too much impact on oil infrastructure 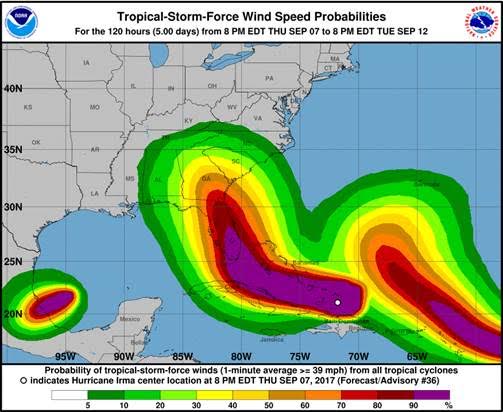