The discussion is going left, right and centre for explanations of why we have such a sharp sell-off in commodities in general and oil specifically. Is the macro backdrop deteriorating? The decline in US consumer confidence by 5 points from March to April as well as a topping over of the global manufacturing PMI at the same time might have been a queue to macro driven investors to take profits on commodities in general. The general view is however that the macro backdrop is fine. That US Q1 growth weakness is transitory and that Chinese infrastructure contractor order intake was strong in Q1-17. Chinese tightening liquidity settings aiming to prevent overheating and too much speculative activity is probably a part of the reason for the sell-off in metals. As such it seems like there is a disconnect between the general macro-view which looks overall positive and the current commodity sell-off which is blood red. Graphing global PMI to commodities does however paint a picture of a fairly good relationship. Is the commodity sell-off an indicator that the somewhat rosy macro view is wrong? Probably not seems to be the main view so far.

Rapidly rising US crude oil production in combination with elevated net long speculative positions in WTI has of course been important foundation for the current sell-off. Speculators have been taking cover as the price moved into technically bearish territory. On Tuesday next week the US EIA will publish its last monthly energy report before OPEC’s meeting on May 25th. It is likely to lift its projected US crude oil production for 2018 yet another 150 – 200 kb/d as it accounts for the 35 oil rigs which were added to the market in April.

Hardly anyone seems to doubt that OPEC will roll over its cuts from H1 to H2 and Russia also seems to be positive for such a decision. This is probably the biggest disconnect in the oil sell-off. OPEC seems positive for cuts, Russia seems positive and the general market expectation is for a roll-over of cuts into H2. A decision to roll over cuts into H2-17 when OPEC meets on May 25th in Vienna will clearly lift Brent crude oil prices back up towards $55/b. As such the current sell-off to $46-47-48/b is clearly a disconnect to the consensus that OPEC will cut in H2-17. Cutting in H2-17 will however stimulate more US oil rigs to enter the market thus leading to higher production in 2018 and 2019. As such a decision to cut on May 25th will be a sacrifice of the balance and oil prices for 2018 and 2019 as it will shift both of those years into strict surplus.

But for now the sell-off is a disconnect to the view that OPEC will cut. As such it is a good buy ahead of the OPEC meeting which is now less than three weeks ahead. Unless of course OPEC totally caves in and instead lets oil production flow unhindered. That would be a vindication of prior Saudi oil minister Ali al-Naimi’s earlier aired view that cutting production is not a good idea as it would only lead to lower volume but not necessarily a higher price. Saudi Arabia may however have too much at stake with its planned Saudi Aramco IPO planned for early 2018 to let the oil flow loose quite yet. Thus betting on the consensus for a cut and buying the current sell-off may not be such a bad idea and strattegy. Rather we think it is a good strattegy to buy into the current sell-off at the moment ahead of the upcoming OPEC meeting.

On the one hand there is now a dissconnect between a strong belief in an OPEC cut versus a current weak oil prices. On the other hand though one might also say that the oil price finally has reconnected with shale oil fundamentals. If the oil market is in no need for yet more oil in 2018 then there is no need to activate yet more oil rigs in the US right now. At the moment we forecast 2018 to be close to balanced. As such the mid-term WTI crude price curve should traded at about $47/b (empirical rig count inflection point versus prices). The 1-2 year WTI forward curve at the time of writing trades at $47.8/b. But that reconnect looks likely to be foreced apart again if/when OPEC decides to roll cuts over into H2-17. In that case the reconnect is postponed to 2018. Post the Saudi Aramco IPO.

Ch1: Global growth momentum topping out?
Graphically yes, but general view is that global growth is fine and that US Q1-17 weakness is transitory 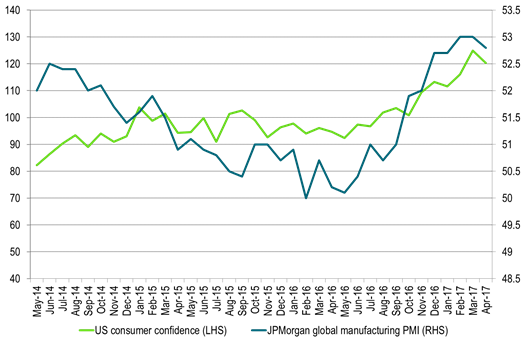 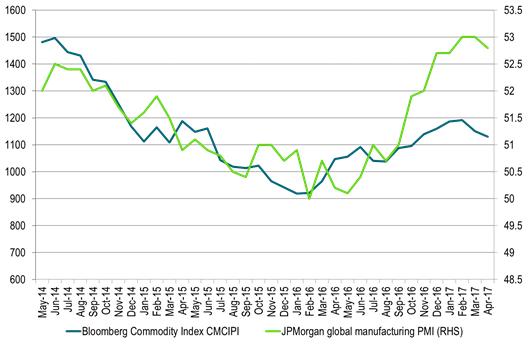 Ch3: Gasoline prices usually a bullish factor into the US driving seasson – But this time it has been a bearish factor dragging crude prices lower 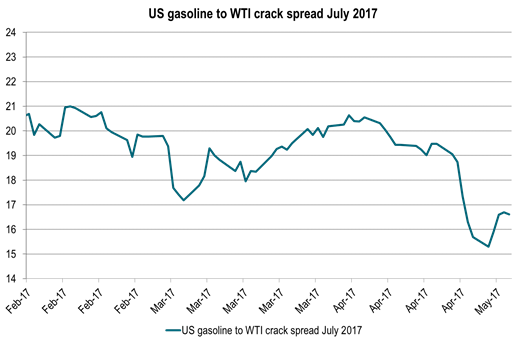 Ch4: Relationship between US mid-term WTI forward prices and weekly US oil rig additions
The inflection point is from April/May/June last year 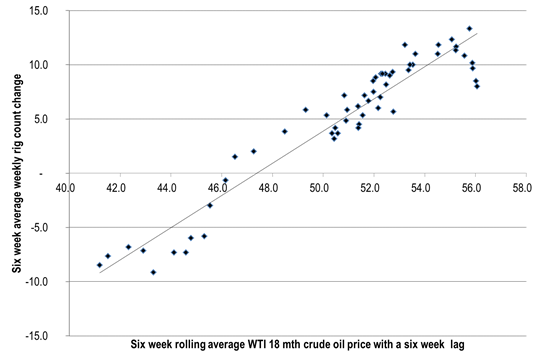 SEB Oil Market Report: Price in a battle to balance the market