Crude oil comment – More oil from Libya? News yesterday that Libya is aiming to increase production by 440 kbpd by restoring production from the Sharara and the Elephant fields weighed on prices yesterday and today as well. The information out of Libya is VERY thin. Visibility on the situation is very low. No concrete information regarding an improving political and security solution. We know that Libya will return with at least one mbpd of oil into the market sooner or later. However, a political solution is probably needed alongside an improving security situation. As long as we have no concrete information that the situation in Libya has turned the corner in this respect, then any agreement of increased oil production is unlikely to last for long. Interestingly this news on Libya is coming one week ahead of the OPEC meeting next week. Thus in context it sounds like “Hey OPEC, don’t forget Libya when you discuss production volumes next week. Make room for us in your future plans because we will move back into the market sooner or later.” Thus the news out of Libya might be a runner up to next week’s OPEC meeting more than anything else. However, if it happens now and if it turns out that the return is stable it is definitely bearish news for the oil price. It is not unheard of that oil continues to flow out of conflict areas despite civil war and political turmoil as both sides in the conflict may be in a position to profit from flowing oil. The problem in Libya is that there is probably not only a two sided conflict, but a multi-sided conflict with a multitude of tribes and interests. 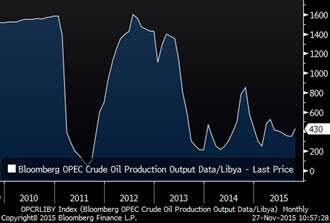 OPEC meeting next week – No cuts. There will be no cuts. If anything OPEC should increase the otherwise arbitrary cap of 30.0 mb/d. They have been producing well above the cap for a long time now. All they are saying, all they are doing and all we know about next year indicates higher production if nothing else due to the return of Iran. OPEC knows this and everyone else knows this. So in order to be crystal clear and be aligned with their actions and words as well as what everyone knows is going to be true for next year, OPEC should increase the cap from current 30 mb/d to 33 mb/d. If they do communicate a higher cap next week it would be bearish sentiment wise for the oil price, but it would basically and fundamentally be absolutely irrelevant for what they will do and for the oil market balance. What they do is not connected to the cap. It is connected to Saudi Arabia strategy and as of now that strategy is more volume and no cuts. Why take all the pain and then cut now. 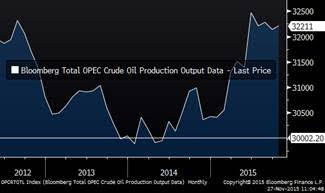 Oil price since start of the week. We have had a Russian jet fighter being shut down over Turkey. At first it increased the geopolitical risk picture and helped to lift the oil price. Russia has now decided to take no military action towards Turkey. Instead they will implement economic sanctions which on the margin are negative for economic growth and thus oil demand. Thus increased geopolitical risk has switched to a marginal drag on demand instead. The Saudi Arabian statement which on Monday lifted prices has been placed into perspective of stabilizing markets rather than lifting markets with no promise of supporting prices. The news bullet first lifted prices but has now basically faded away again. Brent crude front month is up 1.3% this morning since last Friday’s close.

This morning – Lower on bearish China and concerns for increased output from Libya. Shanghai equities are sold off hard (-5.5%) on the back of news that Chinese industrial declined 4.6% y/y in October while consensus was for zero change. The level of -4.6% is not completely out whack with what we have seen earlier this year (Aug: -8.8%) but it is not on the positive side of the average so far this year of -1.3%. Brent crude is trading down 1.3% to $44.9/ and WTI is down 2.3% to $42/b. 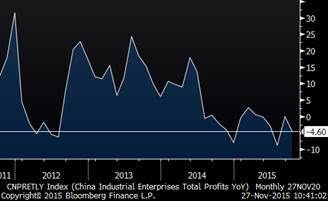