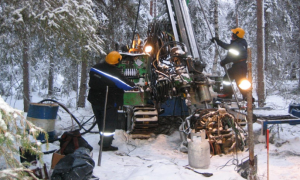 On Wednesday 14 December, there have been a lot of rumors that have questioned the survey state that the British exploration company Beowulf in Jokkmokk in northern Sweden. To clarify this, we have both spoken to the company’s technical director, Jan-Ola Larsson and with the Mountain State where Bergmästare Åsa Persson has helped to clarify.

Q What has happened to your works programme:

We have been transferring the Licences from the English company Beowulf Mining plc to its Swedish subsidiary Beowulf Mining AB. This is so that it can gain an exploitation Licence, as required under Swedish law, but more importantly the AB will be the operating company in Sweden, with Swedish staff and drilling and analysing Swedish iron ore. During this process a works programme for one of our Kallak Licences, Kallak 1 was not sent in, though this oversight has now been rectified. Kallak 1 will only have 22% of our planned drilling campaign in all of the Kallak area. We retain ownership of the Licence and the now submitted works programme will only slightly delay our plans on this part of the project.

Q: So what are you doing:

Our first rig, ”Annie”, is planned to be moved around 2,500 metres south to another Licence we have, Parkejaure nr2 where it will start the already planned drilling. It is also being joined by our second, deep metre drilling rig ”Big Bertha, which will also start in that area. We have submitted our works programme for the Kallak 1 area and hope to have that in place by the start of 2012. We have had confirmation of this process and our position from the Mining Inspectorate.

Q: So what is the operational impact:

Well an oversight is embarrassing though we are fortunate to have alarge area to drill in the Kallak area and already had, following discussions with Geovista, target holes we had planned to drill in the next few weeks. As such there is no real operational delay

Q: Why are you accelerating the drilling campaign at Kallak:

We want to increase the initial JORC Resource we have for this project as soon as possible so that we can move to production as soon as possible. Most can see the benefits of a mine in the area which could employ 300 workers directly and which could, in-turn, lead up to a further 600 being indirectly employed. We listen to all sides of the argument on mining but believe that the merits of this project are very strong on all levels. We also believe a completed works programme will support this view.

The email below is from the Swedish Chief Mine Inspector.

There is an exploration permit which is valid until the 28th of June 2012.

No workplan has been presented concerning 2011 or thereafter

A new workplan for fieldwork has however been received today.

There is an exploration permit which is valid until the 18th of January 2013.

A workplan was sent to Bergsstaten (The Mining Inspectorate of Sweden) on the 11th of November 2011. According to the workplan exploration field work will be carried out until the end of May 2012.

The approval by Bergsstaten is not needed if there are no objections against the workplan from landowners and other stake holders within 3 weeks from taking part of the plan. If there are objections the exploration company can apply for the approval of Bergsstaten (very very uncommon). In this case they have not.