Oil prices staged a 1.6% rebound during the last two days of the week following a more or less continuous sell-off since late May. There were no obvious bull-drivers lifting prices higher. Technical indicators however pointed to solid oversold territory. Headlines started to air views that “when all headlines are bearish, that’s the time to buy” etc.

Crude oil prices are gaining another 1% this morning with Brent 1mth contract trading at $46.0/b. Again there is no obvious bull-driving headline. The price recovery of 2.7% since the bottom last week cannot really be said to be explosive and there is currently no headline bullish driver pushing it higher.

We do have a strong, seasonal increase in oil demand ahead of us for Q3 and Q4 with a substantial amount of refineries heading back into operation. Thus the current weakness in the physical crude oil market could be the final bear-point before a tightening crude oil market and significant inventory draw downs in Q3 and Q4. We do believe that inventories will draw down significantly during the coming two quarters. The price effect could however be a firming of the 1 to 18 mth contract where the 1 mth contract gains versus the 18 mth contract rather than a lifting of the whole forward crude price curve.

The strong rise in floating storage was also suddenly look upon as a sign that physical crude traders are taking long position in physical cargoes awaiting better prices. The reason being that it is not economical to store oil at sea since the contango isn’t really deep enough. Thus the only explanation would thus be that physical traders are proactively taking on floating cargoes in order to position for an oil price rebound. We are however not all that convinced about this argument. The 2 mn bl Sea Lynx VLCC has now been circling in the North Sea for several weeks with oil from the vessel being offered repeatedly to the market. The same goes for the 2 mn bl Desimi with has been circling in the North Sea since late April, early May.

The production revival in Libya and Nigeria is creating concerns for the effect of OPEC’s cuts. Exports from Nigeria now look set to reach 2 mn bl in August while Libya’s NOC last week stated that they reached 0.9 mb/d with a target of 1 mb/d in July. This adds up to 3 mb/d for the two versus a production of 2.2 mb/d in November when OPEC & Co agreed on its production cut.

Last week 11 oil rigs were added in the US. Implied shale oil rigs rose by 13 which is the highest weekly addition since mid-April. Looking 6 weeks back the WTI 18 mth price contract traded at $49-50/b which obviously was not low enough to deter drillers from adding more oil rigs. On average there has been added 6.7 shale oil rigs each week the last 6 weeks. The average weekly additions since June last year are 6.8 rigs/week. The high of rig additions was from mid-Jan to mid-March when 11.6 rigs/week were added. Thus seen from the US shale oil drilling side of things the oil price has not yet become low enough for long enough in order to stem a further rise in active shale oil rigs.

Table1: 11 additional oil rigs last week in the US

Ch1: Changes in US shale oil rig count versus WTI 18 mth contract price some 6 weeks ago. 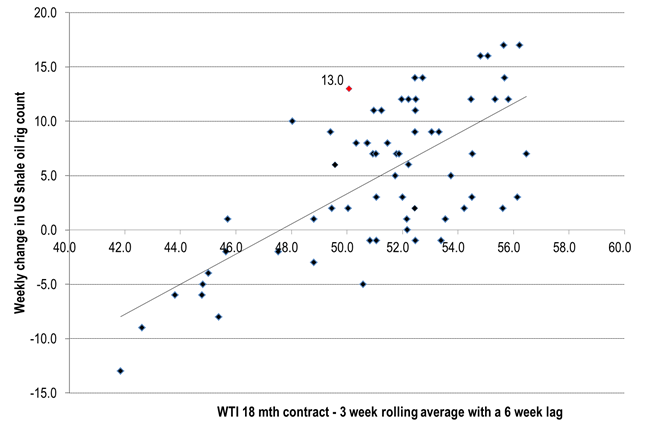 Ch2: The 1-6 mth contango has not deepened
This part of the curve should tighten in Q3 and Q4 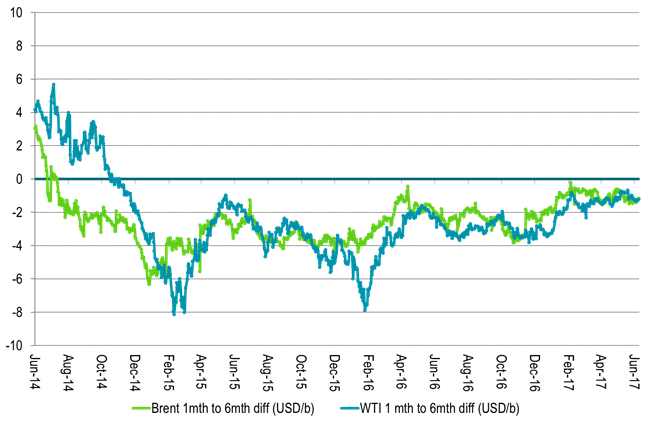 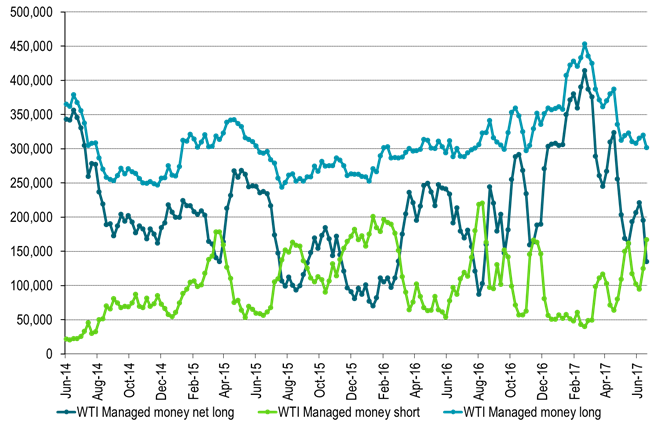 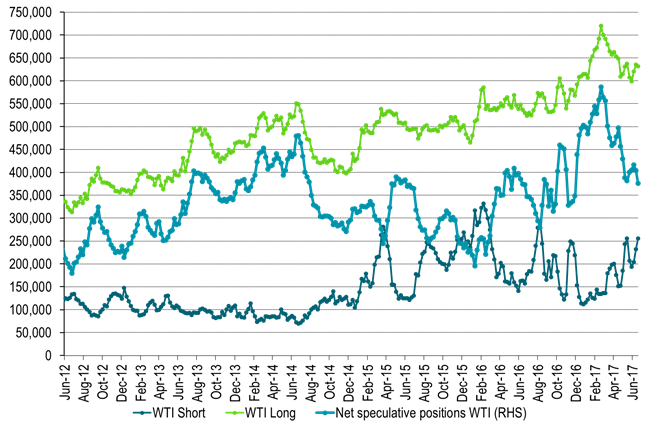 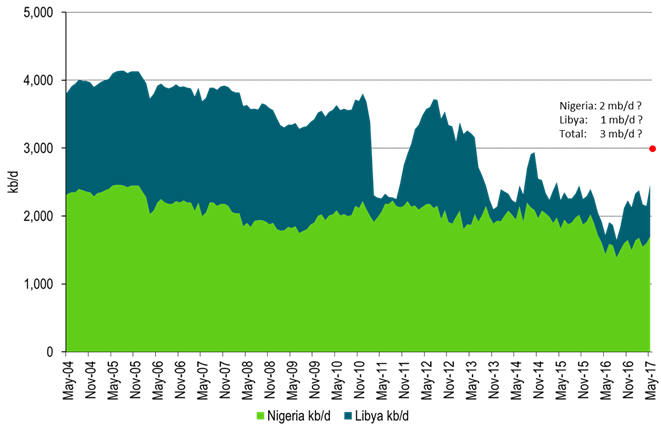