oday’s biannual OPEC meeting was crowded, as has been the case since November 2014 when the group decided to maintain output despite falling prices. The December 2015 meeting led to the official production target being abandoned without any agreement on new output targets. Today’s meeting was not about any major policy; instead, it signalled that OPEC can still work together toward a deal, if it is necessary. OPEC will stick to its policy of unfettered oil production. It was the second subsequent meeting with lack of an oil production target and oil traded lower.

All eyes and ears were on the first new Saudi Arabian oil minister in 20 years, al-Falih. He wanted his first meeting to be a success and was keen to strike a conciliatory tone following the rancour of recent meetings. Today’s meeting had the most frantic media scrum in a long while. One reporter even lost a shoe in the rush to enter the meeting room.

Iran reached full production in May

In April, Iran announced that its oil production would fully recover; according to monthly production data for May, Iran’s production indeed has returned to 3.8 million bbl/d. However, Iran is not prepared to talk about a production freeze. Zanganeh, Iran’s oil minister, instead emphasised that the aim is to continue increasing production, with a target of 4 million bbl/d by the end of 2016 and a long-term production target of 4.6 million bbl/d. Additionally, Zanganeh argued in favour of reintroducing country quotas, stating that OPEC cannot control the market without these. Once again, Zanganeh proved himself to be king of soundbites. When asked by media ahead of the OPEC meeting about his expectations of the meeting, he responded: “nothing”. 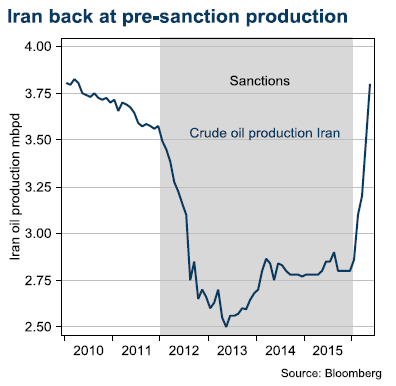 At today’s meeting, only four out of thirteen countries were represented by the same ministers that were present when the current market share strategy was adopted in November 2014. The large number of new oil ministers, with little experience working together, probably makes it more difficult to reach common ground. OPEC’s decisions are reached by consensus; as such, policy will only change if all members agree, meaning it is always easier to keep the current policy than to change it.

As expected, Gabon’s request to rejoin OPEC was accepted. After all, Indonesia’s request was accepted at the last meeting even though it is no longer a net oil exporter. Gabon’s membership in OPEC means that every country that previously left the group has now returned; it also increases the number of members to 14, the highest ever.