Brent crude fell back 0.3% to $75.08/bl ydy after a strong rebound on Mon but is again up 0.8% this morning to $75.7/bl. It is taking little notice of the escalating trade war between the US and China which is threatening global growth and oil demand growth down the road. It is not even daunted by the repeated proposition by Russia to lift the production cap by 1.5 m bl/d.

Iran is naturally offended and disgusted by first having US sanctions reactivated forcing down its production and exports and then at the same time seeing Donald calling for more oil from from OPEC+ in order to push oil prices lower and appease US consumers so the Republicans can make a good mid-term election in Nov. Iran is thus naturally opposing any suggestion of an increase in production. Iran argues that if the oil price now goes high and the US consumers suffers at the pump then Donald is directly to be blamed for this due to the Iran sanctions.

Apparently it looks like Saudi Arabia wants more oil from OPEC+ because Donald Trump is asking for it as a return favour for reviving sanctions towards Iran and standing by Saudi Arabia as a long term ally. Thus even if the most sensible and responsible thing to do is to increase production in the face of collapsing production in Venezuela and now also Libya it will be extremely difficult for Iran to swallow a decision to increase production. It would be a double insult to see the “US bully” first having its way with Iran and then having its way with OPEC+.

It is important to remember that OPEC+ has been extremely lucky with its production cuts. Yes, they have been good and delivered on their cuts but they have also definitely been lucky. If it had not been for a continuous improvement in the global economy since late 2016 and thus strong oil demand growth and a collapsing production in Venezuela then things might have looked quite differently today. Then the group might have had to cut deeper and then yet deeper again in 2019. Now instead the five active cutters (Saudi Arabia, Kuwait, UAE, Iraq and Russia), can and should responsibly exit their cuts in order to avoid a further rallying in the oil price towards $100/bl in 2H18. An oil price of $75/bl is already taxing global consumers (ex-US) as when the oil price was $110/bl back in 2011 to 2014 due to the today much stronger USD. Thus having the oil price rallying to $100/bl in 2H18 at today’s dollar strength would not be good for the global economy at all.

By exiting cuts and reviving production the group is achieving two things. Firs it avoids creating unnecessary risk of hurting global growth and thus oil demand growth. Worst case if OPEC+ does not revive production would be a real spike in the oil price tipping the global economy into recession. In that case there would be no exit from current cuts as an option and instead the cutters would potentially have to cut yet deeper in the face of booming US shale oil production and a tanking global economy. Secondly, by exiting cuts now that it is possible and necessary to do so it will strengthen the position of the group to cut the next time it is a need for cuts by the group.

Thus the only sensible thing to do seems to be to revive production and exit cuts. However, as long as it seems like OPEC+ is abiding by Donald Trump’s call for more oil from OPEC+ it must be very difficult for Iran to swallow such a double insult. To us however it seem more like the real call for more oil and exit of cuts is coming from Russia. Its private oil companies are clearly eager to get back in business and away from their “voluntary” caps directed by Putin/Novak in cooperation with OPEC+. After all the goal of the cuts of getting OECD inventories back down to the rolling five year average has been reached.

It would be great if OPEC+ could unite behind exit of cuts and revival of production. The challenge would be to formulate a statement that removes any suggestion that the increase in production comes as a response to Donald’s call for more oil from OPEC+. It would however be difficult to avoid that Donald would take it as a victory to see a revival of production by the cutters in the group following he’s recent tweets on the subject. Iran’s oil minister Zanganeh has said that he’ll leave Vienna on Friday following the normal OPEC meeting and not attending the Saturday meeting including the ten cooperating countries.

Ch1: Weekly crude and product inventories US, EU, Sing, Floating given as change vs. start of year in million barrels.

Iran has a point that it does not seem like there is a need for more oil in the market as inventories are actually up ytd by 25 m bl. This does however not take into account likely further rapid decline in Venezuela’s production in 2H18 together with seasonally higher demand in the second half of the year. Latest disruption in Libya’s production adds to the tightening outlook for 2H18. The jump in weekly stocks does however look a little random and may just be a temporary issue due to refinery maintenance. 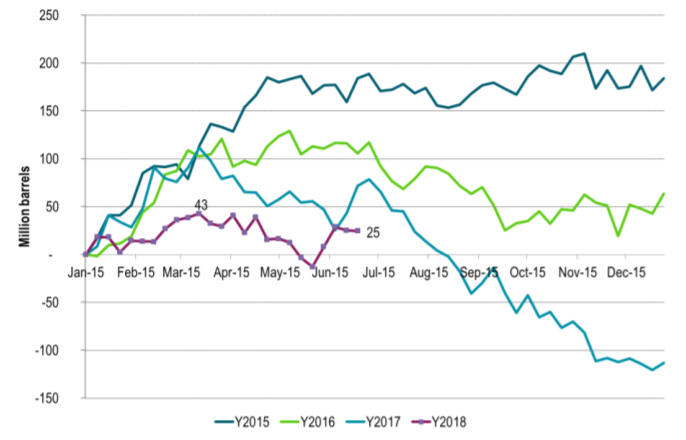