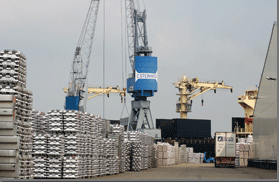 It sometimes escapes the attention that the minor metals, just about all bar cadmium, have had a exceedingly good run in the past few years. They brushed aside recession like a man with something else on his mind. In the 4 years 2008-12 here have been the results:

The rare earths minerals, also known as Lanthanides can be considered minors. This complex group of 17 mineral elements, found in association, has a total production of less than 135,000 tonnes. They are difficult to refine, have highly specific end uses and even more selective end user outlets. There is little or no market as such in the individual metals or their compounds. The rare earths oxide (REO) equivalent price has fluctuated between less than $60 to over $130/t since 1994. Its supply is in the grip of China, which now produces upwards of 97% of total. What fun, both price and demand are accelerating as the mineral’s end uses, particularly in electronics, are burgeoning. In broad terms they break down into:

In production, China’s monopoly was allowed to grow whilst the others fell asleep. Its progression has been:

Reserves exceed 90 years present demand, so China’s holding of 48% is not immediately critical. Other major holders are the USA, Russia/CIS and Australia. The world is presently up in arms about China’s dominant position. Cries of ‘foul’ are increasingly daily. Let’s examine the cause and the possible effect:

Meanwhile China’s domestic appetite for REOs is growing so it has slapped on export quotas. The USA, Japan and the EU, the major destinations, are not happy. They have called upon the World Trade Organisation (WTO) to smack China’s botty. You think the land of silk and money will care? No boys, get producing your own and generate the next glut; it keeps us analysts in business. The number of companies now involved in REOs is proliferating. It includes:

Peak Resources (PEK.AX A$0.43; Hi-Lo A$0.80-0.25; operating in Tanzania), Namibia Rare Earths (NRE.TO C$0.40; Hi- Lo C$0.87-0.37, operating in Namibia). Over 200 juniors are thought to be active; selectivity is called for. In a novel twist, a Chinese REO group, Earths Global Ltd, plans to launch on the London AIM market by late this month. The $50M raise will value it at about $270M. Charles Stanley will be NOBRO. It is described as a vertically integrated company which specialises in the extraction, separation, refining and trading of REOs.