It is a proven fact that traded metals do not hold strong religious beliefs. So they exited Christmas and New Year in the same mood that they entered. They mirrored the mood of the economy. It there is to be a recovery – not just this one, any one – the basic steel industry metals kick start it, for roads and building work. Then come the non-ferrous for manufacturing cars and consumer goods, followed by the minors for the clever, high technology end. Last but not least we have the pure indulgences, like diamonds. So it was. Both coal (3%) and iron ore (1%) nudged up last week, the exchanged traded metals hardly moved and the minors were down to neutral. So no runaway recovery posted yet. LME warehouse stocks were indicative. We are conditioning ourselves to aluminium, nickel and zinc being in structural surplus and copper being tight. The stocks concurred. Copper’s fall of almost 4% contrasted with aluminium’s rise of over 3%.

The price is level across the 15-month contract spread and could move into a backwardation. It has been a long time since the metals offered these opportunities. Copper could tighten further, although the knowledgeable Simon Hunt, of SH Strategic Services, warns that much of its surplus can be laid at the doorstep of speculators and investors (spot the difference?). On the physical front, Peru, world No 3 miner (8% of total), is still grappling with environmentalists. Then to Indonesia. There Freeport McMoran has settled (or so it thought) a long running violent dispute at its giant Grasberg Mine only to be told the workers are demanding payment for the three months they were on strike. Interesting people, workers. Met one once. 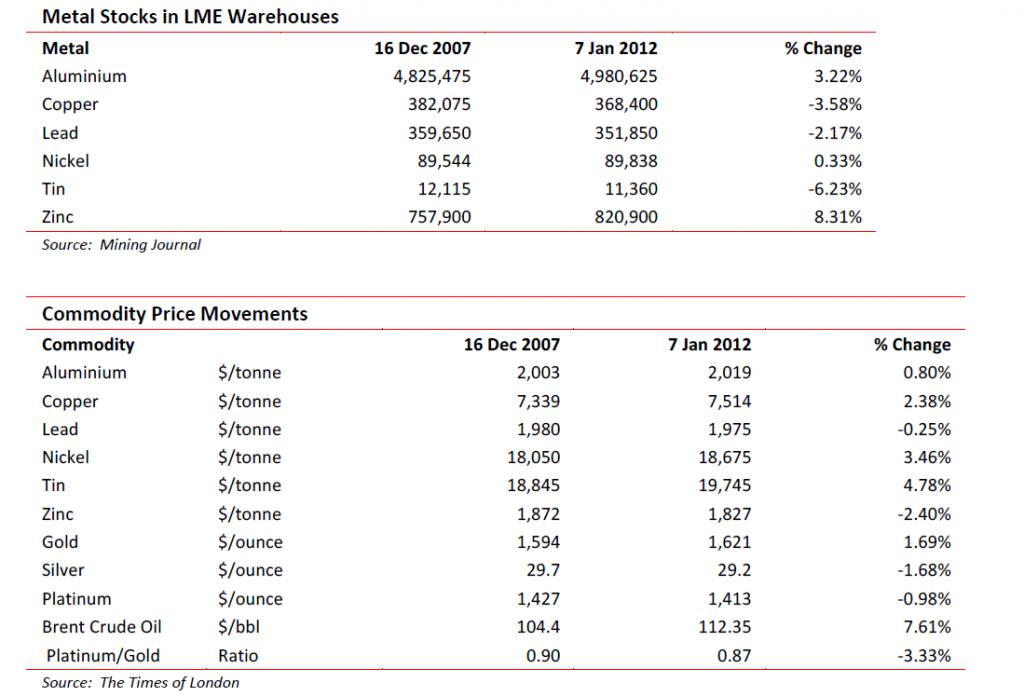 So a leading analyst tells us silver hit an all time high in 2011. Can’t fault that, but so did gold and platinum. Then which did best and why and will the same factors drive 2013?

Why? this is much about the Euro and the world will not come to an end whatever the outcome of that sad saga. If the world economy DOES turn down, then silver and platinum will follow it as industrial metals. If it turns up, so will inflation and interest rates. The attractions of gold will diminish. An increasingly ventilated idea is that China will spend some of its $3.2 x 10¹² FOREX reserves buying gold ready for the People’s Republic taking over from the USA. We pointed out some time ago that it is not really do-able. It would buy them about 62,000 tonnes at $1600/oz but would curtail their financial raping and pillaging of Africa. They would need to buy at least 8000 tonnes to overtake what Fort Knox has, then think what it would do to the price. We prefer Plan B, which is allowing their citizens to buy it as a safe haven and take it off them when the need arises. If it worked for the US and Germany, why not China? Annual gold output is c.2600 tonnes, so where would it all come from?

Our friend Adrian Day of Day Asset Management is bullish for gold with caveats. He notes wealth is shifting from West to East (where they have a different take on hoarding and with good reason) and that investors are waiting for a floor. Like a boxer who has gone on too long? He also looks as we do for shares to outperform the metal on the upside. But there has to be an upside. Any more on the down and the shares will fall further.

The Banks Get Coy on gold. Two of Britain’s biggest banks, HSBC and Barclays, have backed off mega upside projections for 2012. HSBC rests at $1825. Barclays comes in at $1875. But J P Morgan Chase, with Morgan Stanley and Société Generale, are for it to be ‘well above’ $2000. Ever thought of taking up darts? It would be uncharitable to suggest the big boys are talking up their own books now, wouldn’t it?

Related Topics:david hargreavesmetalsminerals
Up Next