No, gold is not going up is it? It laboured all week on the downside and platinum, despite the worsening RSA strike situation, only marginally stretches its premium. Silver clings to its lifebelt. We have only passing sympathy for the bulls (and you know who you are), because despite what is occurring in the world’s hotspots (see Energy) this is becoming an economic, not a military, battlefield. Gold closed last week at $1301/oz and this at $1281/oz Not huge move, but a downside indicative. As a simple soul, WIM goes for $1200 as a base. More informed guesses reach below. Morgan Stanley has now run alongside Goldman Sachs with predictions of $1108 for H2 2014 and $1138 for 2015.

WIM says: We agree with the trend, but such precision smacks of Chartism. As students of history know, the Chartists ended up with ropes around their necks. It is much about the US Federal Reserve continuing its tapering policy. Not to be outdone, ABN AMRO goes for $1000 by end of this year.

LMBA, in a pooled-analysts’ view, did a year and $1000. We hope you will forgive WIM for sticking to simple numbers, like $1200. It is easy on the mental arithmetic. Much of the bearishness rests of the prospect of Chinese demand – rampant in the past few years – slackening as that country comes to grips with a weakening economy, with its currency, the yen, falling further against the US dollar. Overall, the upturn in world economic activity is seen as a most bearish factor for gold. The metal does not carry interest, shares do.

Platinum. The price drag with gold remains telling. We now see the Pt/Au ratio back at 1.13, compared with its late 2012 level of 0.92, a discount. Much of course is about the strike in RSA. That shows all the symptoms of becoming bloody. It enters its 14th week (a long time without a wage packet) and Federal elections are due on May 7th. So a Pt price bounce is on the cards.

The platinum saga rolls on.

Workers’ unions were born of necessity and miners were early ones to deliver. Hard, demanding industries to that. When disputes with management arise, the right to strike is the ultimate bargaining chip. Sometimes it gets used wrongly and it is often the result of a lack of an economic grip by the opposing sides. The current RSA platinum field strike is classic. The metal was in oversupply, there are large surface stocks, the price was under pressure and cost were rising. A new union, AMCU sprang up, achieved a majority of membership at the big mine. It demanded not a cost of living increase but a doubling of wages. The companies’ first response was 10% per year for three years; plus benefits. The union struck and the strike is now in its 14th week. Negotiations have broken down and violence hovers.

It is felt that a lot of the miners would return on the offered terms but the block vote holds sway. So the bosses are attempting to contact them individually. As the platinum price closed at $1425 on Friday evening, a tad down on the week, we do not sense panic. But we do smell fear. This is colouring in elections of May 7th, next Wednesday, and could shape the world perspective on South Africa as an investment destination.

Then Gold? The London PM Fix at $1281, is but $20 adrift on the week, at 1.5%, but adrift it is. Major movers are calling it down. Meanwhile the major gold miners are beginning to chalk up losses. Yamana Gold (YRI.TX C$819; Hi-Lo C$13.16-7.93) is congratulating itself on the capture of 50% of Osisko Mining and its Canadian Malartic Mine but has chalked up a Q1 loss of c. $30M for 2014. The reasons are ominous: lower prices, lower sales and higher costs.

(Thinks: Time for some housekeeping?). It places great hope on its J/V with Agnico-Eagle on Osisko. Not all is gloom.

For the year it looks to 1.4M gold equivalent ounces (GEO), with silver and copper adding to the pot. All sustaining cash costs were $975/oz. The net loss of US $28.7M is 4c per share in Q1. Indicatively it looks more at its Cerro-Moto gold and silver project in Argentina than its Brazilian prospects.

WIM says: We might let the dust settle here for a while. 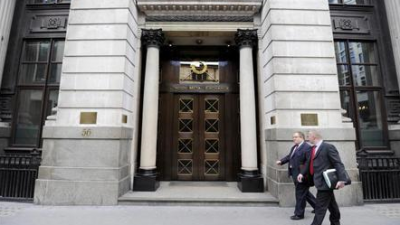