Brent crude oil gained 11% to $33.36/b and WTI gained 12.3% to $29.44/b on Friday. And on what? It was not all that easy to identify, but there are of course a few moving parts which can be pieced together. One bearish driving force lately has been the deteriorating refining cracks in both Europe and the US. US refining margins in the US mid-continent almost went to zero recently as crude oil surplus increasingly has been transferred to a product surplus. This steep decline signalled a reduction in refining activity both in the US and in Europe ahead which would lead to increased stock building of crude oil. This would be especially acute in the US mid-continent with already high inventories. This is especially so in Cushing Oklahoma where stocks are close to maximum capacity. After having moved almost to zero on Monday a week ago the mid-continent cracks did however move into a solid recovery lifted by stronger product prices in the US in response to reduced refining activity. This probably did give some support to crude oil prices as well.

Another element was that the Dated Brent spot price moved to a one dollar premium to the front month Brent crude oil contract in a sign of some kind of temporary tightness in the physical crude oil market in the North Sea. The spot price has been in solid discount to the Brent 1 month price all since the global crude oil market moved into surplus in mid-2014. We do think that this supportiveness in the Dated Brent price is of temporary nature due to the still robust global stock building.

The exact details for what drove Dated Brent to a premium of front month Brent last week we don’t know. Typically these events are connected to balance and trading of physical cargoes. It was the biggest mark-up for Dated over the front month contract since March 2015 and clearly gave some bullish impetus to the financially traded oil market at the end of last week. The Dated Brent price is now however back to half a dollar discount to the front month price. The average discount has however been more than one dollar since mid-2014. Also today we have this slight bend in the Brent forward curve as a reflection of some kind of physical tightness in the Brent crude oil market and the Dated price has still not moved back to its “normal” one dollar discount to the front month price which has been the norm since mid-2014.

We believe that we are still in the midst of a stock building phase with growing oil inventories and deepening contango with still some time to go. However, we are also in a rebalancing period. What drove down US crude oil imports from 2007 was declining demand to start with. Thereafter imports declined yet further as US shale oil production rallied from 2011 onwards. US oil consumption is now instead increasing while US crude oil production is declining even though not steeply. US imports of crude oil from OPEC has now probably bottomed out and the tide is gradually turning towards a rise in imports instead.

For now however, we are still amidst a global stock building situation with a solid running surplus of oil. At least that is the calculation. One always needs to be humble to the fact that one do not really know the actual oil market balance. We have partial information about the supply/demand balance as well as global oil inventories. Oil prices however we do know and they are a reflection of both financial flows as well as physical fundamentals. The price picture can however be quite deceiving due to temporary effects and financial flows. The firming Dated Brent price versus the front month price is typically something which we would witness once the market starts to firm up. As such it is important to take note of last week’s event as well as today’s also fairly small Dated discount to the front month contract. For now however we believe it is a temporary event rather than signalling the start of a rapidly tightening situation.

The big jump in crude oil prices we experienced end of last week may have been instigated by changes in refining margins or physical spot prices or rumours for potential joint production cuts by OPEC and Russia. However, the magnitude of bounce was clearly driven by financial flows and potentially short covering. Speculative short positions (as depicted by shorts by managed money) are very high. Thus price moves to the upside are likely to be violent due to short covering when they happen.

Brent crude oil price did not challenge the low from January 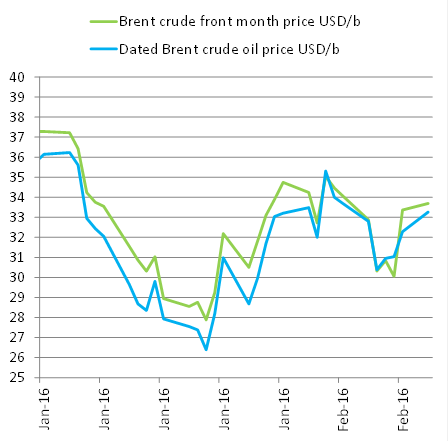 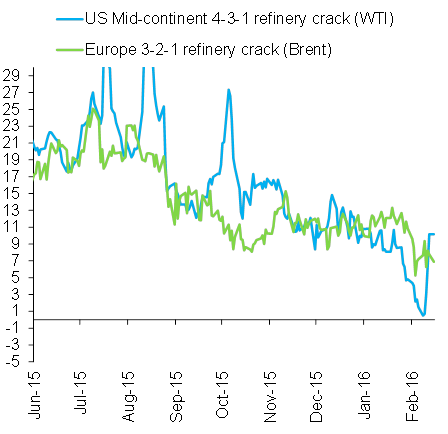 Dated Brent price moved to a one dollar premium to Brent front month
Probably on the back of temporary tightness on the back of physical trading of cargoes. 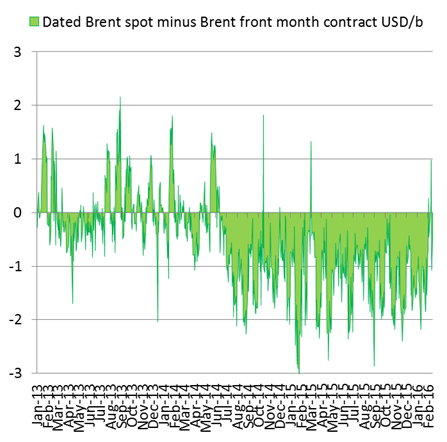 Brent curve with reduced contango, but WTI curve shouts: “Store your oil somewhere else. We are full and it is expensive to store oil here”
Thus reduced US oil imports and softer stock building in the US may be the consequence.
It basically means that stock building will have to take place somewhere else. 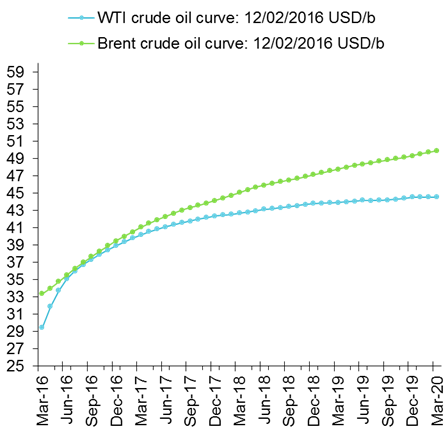 Global oil inventories are still rising quite solidly
There is little sign of any weakening in the current ongoing stock building.
Thus the recent reduction in contango should be temporary.
Floating storage is mostly oil in transit rather than financially driven deliberate storage of oil 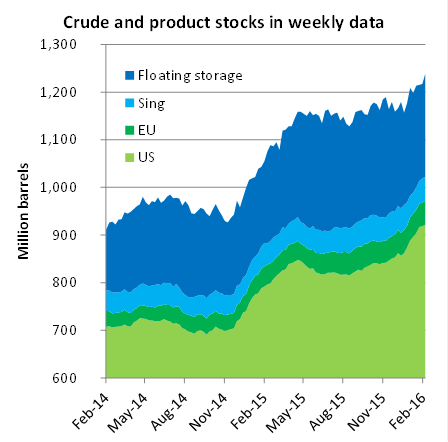 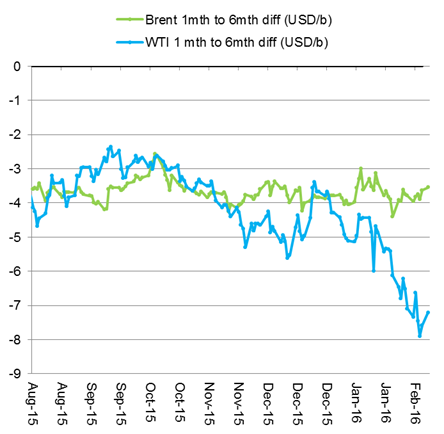 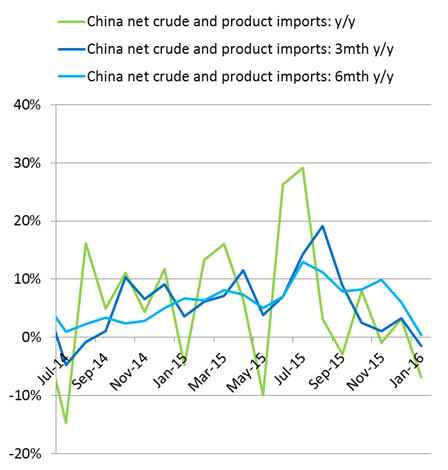 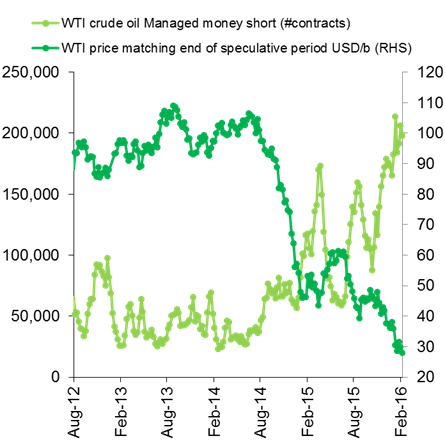 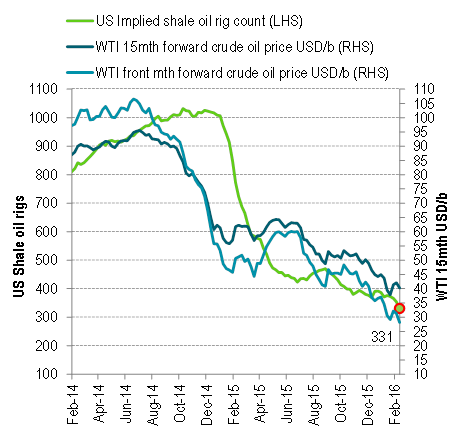 US crude oil imports from OPEC on the rise 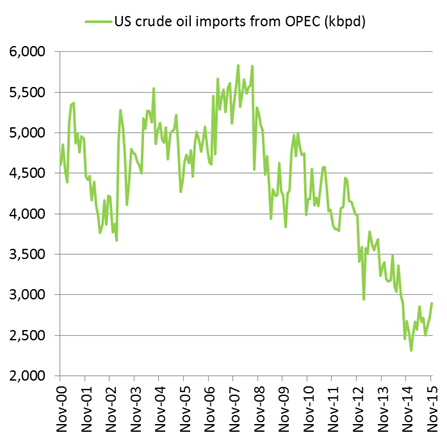