If you mess with the Middle East then the most natural thing to expect is that you will get a high oil price in return. Donald Trump of course knows this but he still tries to fight it as he whish for a lower oil price leading into the US mid-term election. Last week ahead of the Algerian OPEC/non-OPEC JMMC weekend-meeting he verbally charged into the market again. But it was to no help as the group of producers promised no more than they already had promised earlier. “OPEC+” produced 49.8 m bl/d in Aug (ex. Bahrain & Congo in lack of good data) while its pledged target is 50.1 m bl/d.

Oil importing and oil consuming countries have always been fearful that the oil rich Middle East countries could cut off oil supply and thereby drive their economies to a grinding halt. They have been fearful of a repeat of oil supply being chocked off like in the 70ies and 80ies. Deliberate or not. Fearful of a Mid-East oil embargo.

These days Donald Trump is playing hard ball with Iran: “We’ll drive your oil exports to zero unless you renegotiate the JCPOA nuclear deal”. Feeling confident that the US these days is almost self-sufficient with oil. What if Iran took him up on this and instead turned it around with Iran saying: “There will be no oil exports out of Iran at all unless the US ratifies the JCPOA deal again as is”.

It is true that the US is getting close to self-sufficiency in terms of oil supply. As such Donald Trump can feel confident versus challenging Iran. The US economy and its consumers are however still exposed to high oil prices. And Donald Trump is especially exposed and vulnerable right now leading up to the US mid-term election on November 6th which is just two days after the US sanctions against Iran kicks in fully and legally. Donald Trump probably wants low oil prices, low gasoline prices, happy consumers and happy voters leading up to the mid-term elections.

It is however doubtful that the US as well as Donald Trump really want low oil prices in the longer term as it is really high prices which will make the US totally hydrocarbon liquid independent in not too long. But in the short term to November 6th he probably wants to see muted oil prices. There is thus probably a brief window of opportunity where Iran could turn the situation around 180˚ from being a victim of oil sanctions from the US to instead playing hard ball right back and declare an oil embargo to the world. After all Iran is one of the key oil suppliers in the world. It is also on good terms with Iraq with which it potentially could persuade to cooperate for a few months. And in the current fairly tight oil market it would not take much oil off the market to drive the oil price spiky higher.

In terms of oil prices there is suddenly a lot of talk about $100/bl. And it is of course some merit to it. Market is getting tight as we lose more and more supply from Iran and Venezuela. If we look at the price distribution of daily Brent crude oil front month prices since January 2005 till today we see that the price rarely stays in the price range from $80 – 100/bl. It has historically either been lower or higher. This is of course purely statistical and to a large degree a play with numbers. Nonetheless it does make some sense logically.

The oil market is basically hardly ever in balance. It is either too much or too little. It is very hard to balance it just right. That means that the oil market naturally will move between the two extremes of

We have currently no strong view for $100/bl but in general our view is that “OPEC+” is getting less and less control of upside price risk as its reserve capacity increasingly is eroded.

If Iran decides to play hard ball with the US and give Donald Trump what he is asking for: “No exports out of Iran” then Iran still has some 2.5 m bl/d of hydro carbon liquids exports which it could halt. That would definitely drive the oil price to $120/bl or higher in today’s market.

Ch1: Distribution of daily Brent crude oil prices. Not a lot from $80 – 100/bl as the oil market is normally either in surplus or deficit 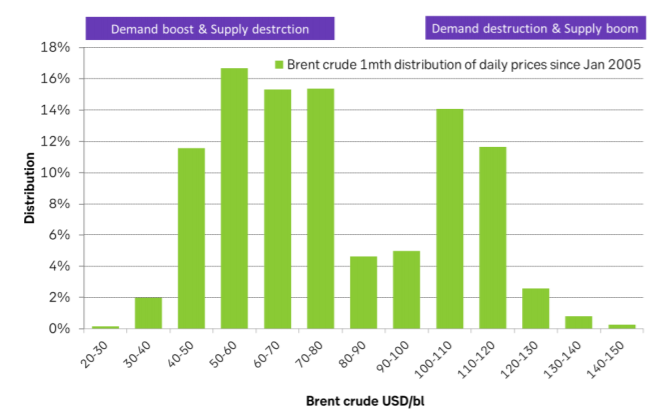 Ch2: Production of “OPEC+” got close to the pledged target in August. No promises of more than that as of yet. 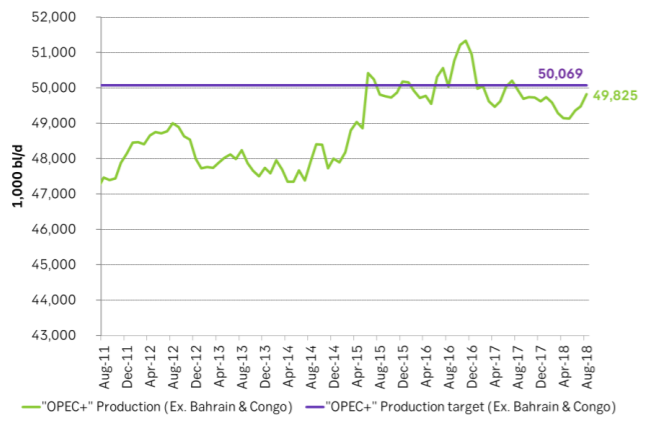 Ch3: Iran production, consumption and implied exports. Exports have fallen some 500 k bl/d but there is still another 2.5 m bl /d at stake 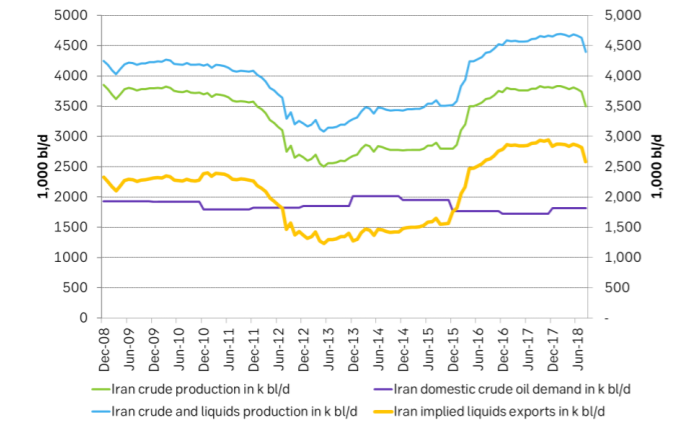