Rarely have we seen such a brutal break of a major level as when Brent crude broke above $80/bl on September 24. It did not spend a second looking back (re-testing the $80/bl level etc) but instead just charged directly higher. In hindsight we can see that it was really the Oman crude benchmark which was leading the way. This is very unusual as it is normally the light sweet grades like WTI and Brent which takes the lead. The Oman benchmark with gravity and sulphur of (API; S%) = (31.3˚; 1.4%) is the typical medium-heavy and sour grade benchmark of the Middle East. Most modern refineries are built exactly for this kind of crude grade because that is the kind of crude which is most abundant in the world.

Iran’ crudes have an average gravity of API = 31 but has a higher sulphur content of 2.2%. It is nonetheless a medium-heavy, sour crude now being ripped out of the market. One could say that the actual implementation of the US sanctions towards Iran do not fully kick in before November 4. The fact is however that the real consumers of crude oil, the refineries, are doing their physical purchasing on a typical 1 to 3 months forward basis. November is now thus in the middle of this physical purchasing window.

Privately owned refineries around the world cannot afford to cross swords with Donald Trump’ Iran sanctions. They cannot afford to lose access to the global financial system (where US banks are tightly interwoven), to the international ship insurance market or to the US market in general. Thus they all do the natural thing: They do not contract physical oil from Iran for November onwards.

Since the refineries currently using Iran crude are made to process medium-heavy, sour crude their purchases are now naturally re-directed towards other producers of this type of crude. That means Middle East producers. That means the Oman crude benchmark and not the Brent crude benchmark. This means that the Oman benchmark could continue to lead the way on this issue. So in order to look for direction of Brent crude one should keep a close eye on the Oman benchmark these days.

If we look at the Brent – Oman spread we see that Brent crude is only trading $0.4/bl above Oman. That is a very small margin versus the ytd average of $2.2/bl. This tighter spread may be the new norm now in this tighter medium sour crude market (due to Iran sanctions). However, if the Oman benchmark holds its stand at current level it does look like Brent is likely going to be pushed upwards. Overall it looks likely that Oman is going to be pushed yet higher and that Brent will be riding on the top of that wave higher.

When we look at the graphical development of the Oman crude price the impact from the Iran sanctions now hitting the forward physical purchasing window of the world’s refineries looks brutal. Oman has taken a pause in order to let Brent crude catch up with its upwards move but Brent needs to move another dollar or two upwards before normal spreads are re-established.

Unless the other Middle East producers offers sufficient medium sour crude on the market in this forward window in order to offset the loss of Iranian supply then Oman, your direction is up and Brent will follow or float higher on top. 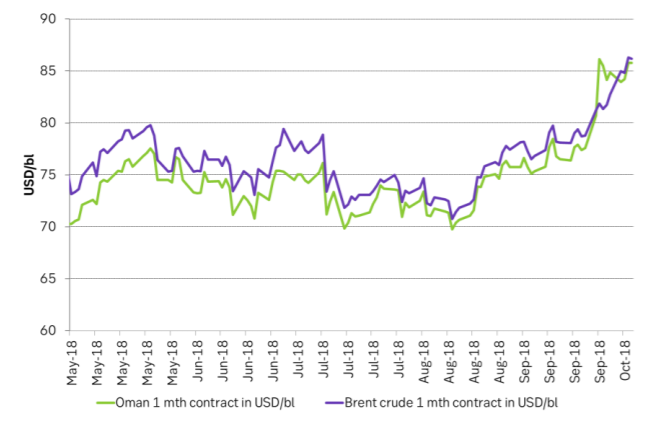 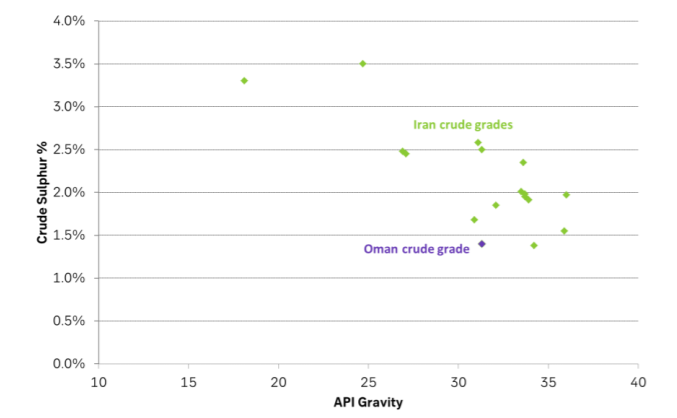 Ch3: Global crude volumes by grades according to ENI 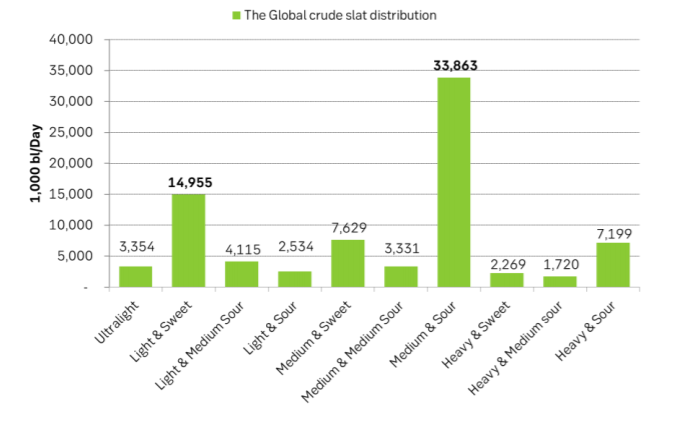 US shale oil production growth to slow sharply in 2020