Harvey has presumably dissrupted some 3 to 4 m bl/d of refinery activity in the area around Houston Texas and Louisiana or up to 20% of total US refining capacity. This leads to a comparable amount of reduced refinery processing/consumption of crude oil and a likewise a reduction in the supply of oil products from the closed refineries. Thus crude oil prices have declined while oil product prices have increased.

The refinery margin to produce oil products have increased strongly over the past week. Both the diesel and the gasoline cracks in the US (product prices versus WTI crude (feedstock) prices) have sky rocketed. Product cracks in Europe has also followed suit but somewhat less as Brent crude has held its ground better than WTI.

The WTI crude oil price has gotten an exstra push to the downside because the WTI index is priced in Cushing Oklahoma. Lots of US shale oil is flowing through Cushing on its way to the coast where this high quality crude is either processed or exported while lower quality medium sour crude is imported to match the need of the refineries in the area.

At the moment lots of ports are shut and out of operation. Thus many of the refineries are neither able to import the medium sour crude they need nor transporting away potential oil products they might produce no matter whether the refineries are damaged or not. As long as the ports are closed there is little they can do. At the same time crude oil on its way to the GOM is accumulating in Cushing which is the actual pricing point of WTI. As stocks fill up there the WTI crude oil prices are pushed lower with deepening WTI crude oil contango. Some 40 fuel tankers are currently booked to ship oil products from Europe to the US to compensate for lost oil product production there.

The Brent crude oil forward curve is however still trading in backwardation at the front end of the curve. Thus the deepening contango in WTI is purly a local, logistical effect impacting WTI while it is not impacting the global, seaborn based Brent crude marker as much. The halt in the flow of light sweet crude through Cushing, down to Houston and out into the global crude market is now reducing the supply of this key crude quality which is similar to Brent crude. Thus the value of light sweet crude in the global market should increase.

The decline of 350 kb/d of light sweet crude in Libya at the moment is also helping to tighten up the availability of this high crude oil in the global market place. Expert projections are that the decline in Libya’s production is only likely to last some 2-3 weeks. Thus some tightening, but not a major issue as of yet.

Since the refineries now closed in the GOM are good at processing medium to havey sour crude it also has an impact on these crude grades. A portion of these heavier crude grades are now suddenly not processed. There is more of it available in the market and the price should sink. Thus we could see a widening spread in the pricing of heavy sour crude versus light sweet crude but we have not seen much of that yet. The Brent crude oil price curve has fallen back over the past week and so has the front end backwardation in the curve but it is still in backwardation.

While product cracks have skyrocketed for the October contracts there is little to be seen in contracts one year down the road. How short lived the effect will be depends on how serious the damages are on pipelines, ports and refineries. A picture which probably will be clearer during the coming week.

Ch1: Gasoline cracks going high in Europe but even higher in the US since WTI crude falls back more
Brent over WTI spread has been widening all since the start of the year reflecting increasing US light sweet production 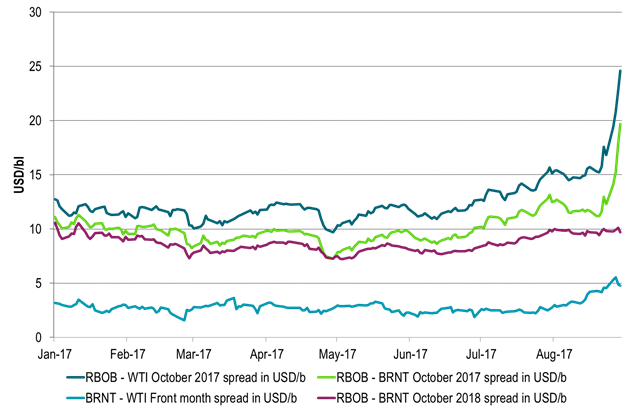 Ch2: Gasoil higher, WTI crude oil lower while Brent curve still in slight backwardation
While there is little impact on cracks a full one year down the road the imact is clearly felt 3, 4 and 5 mths down the road 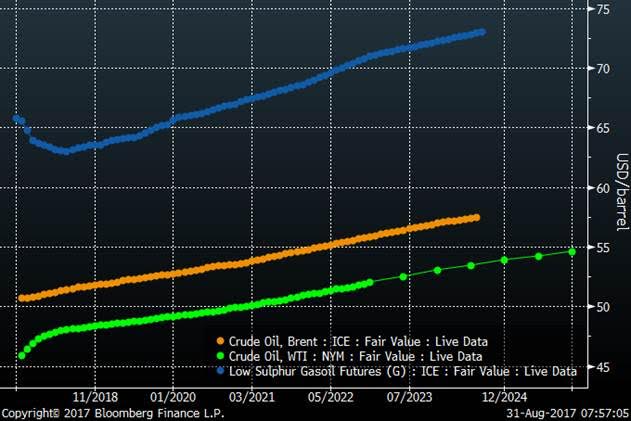